The Ancient Tripod of Peace: A Teen Thief-Catchers Novel **Excerpts** 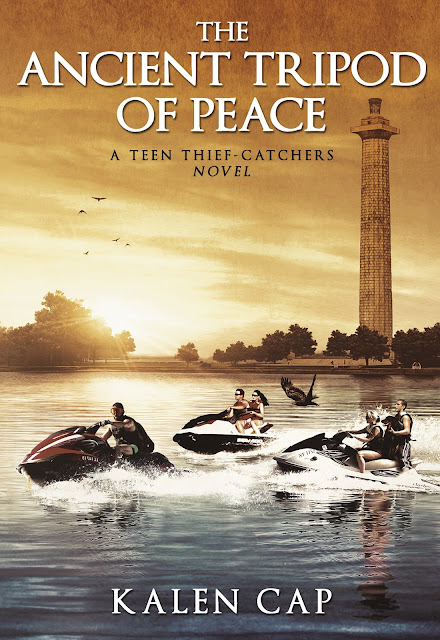 Plagued by loneliness in her Lake Erie Islands community, vegan Lexi hopes to make like-minded friends in high school. But her dad’s job is jeopardized when relics are stolen from his museum, changing her priorities. And she finds her new teachers’ eerie dislike of her troubling.

His dad in jail, cipher enthusiast and bacon-loving Gil hopes freshman year will provide a clean slate. Soon, he discovers secret codes within a Shakespearean play while paired with Lexi, pulling him into an ancient mystery.

With the official museum burglary investigation stalled, the mismatched teen sleuths join forces to try and crack the case. Lexi’s inquiries and Gil’s codes capture their teachers’ attention. But these teachers have the stolen Tripod of Peace, a powerful relic sought by rival secret societies. Caught in these societies’ crossfire as thieves wield an instrument of astounding power, Gil and Lexi are in danger.

The Ancient Tripod of Peace is the first book in novelist Kalen Cap’s Teen Thief-Catchers Series. If you like stories with artifact treasures, fighting secret societies, and spirited protagonists, you’ll enjoy this novel.

Brandon flicked on the light switch. The yellow bulb provided a muted view of the dusty, windowless room.

A box with shiny tape near the entrance looked new. It contained three metal pieces, each about thirty inches in length, that he needed. He unboxed the items, each unevenly notched and appended with short metal lengths, and set them by the door. He found the only large piece, a tripod seat, already unboxed in the back of the room. The museum board had pulled the tripod seat from the prior evening’s exhibit opening on the main floor.

Though he’d received a text confirming arrangements as planned, Brandon grew worried two remaining pieces were displayed upstairs after all. He wouldn't risk triggering the security system in the main exhibition hall to retrieve them if they there. Breaking into the warehouse was already too far beyond his comfort zone.

The room’s dust taking its toll, Brandon sneezed. He frowned, worried a sprayed dripping might get him caught by some high tech analysis like those used in crime television shows. It’d be my luck to be caught by snot.

Or sweat. Tears of perspiration streamed down his cheek. Brandon checked the room again. Curation opportunity? What a joke!

Sue Ballentine, who hired him for the job, had called it a “curation opportunity.” Though Brandon knew selling steroids was illegal, stealing objects from a museum was a more aggressive crime. But he needed the money to finish paying his supplier.

Brandon knew not to cross his steroid supplier in Detroit.

“If you worked out more, you’d sleep better,” Brandon said, grabbing a protein shake from the fridge.

“You’re right. I should do that - workout more. Would you give me some pointers?” Gil asked.

“Uh, sure. But, I’m only here through Tuesday,” Brandon said. “College will be busy after that.”

“I’m all skin and bones. Any advice would be better than none.”

“Advice will only help if you actually do the workouts,” Brandon snapped.

“Really? Thanks for the tip. That one’s real helpful,” Gil said.

“Sorry,” Brandon apologized. “And you’re not just skin and bones, brainiac. You got your straight-A mind going for you.”

That surprised Gil. His brother neither apologized nor complimented often. “Were you at the gym?”

“No. Did a little jogging along the lake shore.” Brandon’s face reddened, beads of sweat rolled down his cheeks.

“You all right?” Gil asked. That must’ve been some cardio. Though impressive with weights, Brandon was slower when it came to aerobic exercise. His struggles with it only made Gil admire him more, since Brandon did the cardio anyway.

“Sure. It’s just warm outside already is all. Now, spill it. Who are you trying to gain muscle for? Who is she?” Brandon asked.

“Good idea. Focus on school and then, the right girl will find you. Geeks are in, at least, that’s what they say. I could have avoided a lot of problems if I focused better during high school.” Brandon gulped down a green concoction that made Gil queasy simply looking at it.

“Yeah. Mom says to focus on school, too. Oh, guess what? Mom knows one of my high school teachers, called him an odd duck. Said she worked on a fundraiser for his bird sanctuary.”

Brandon spewed the protein shake across the counter.

“Dude! That was classic! What gives?” Gil couldn’t help snickering, although his brother looked like he might be truly sick.

“Ah. Nothing. Went up my nose is all.” Brandon grabbed a dish towel and wiped up the mess. “So, you said this bird sanctuary guy is your teacher? What’s his name?”

“Nick Saffron is not old.”

“If you say so. He’s at least in his fifties, older than Dad. You know him?” 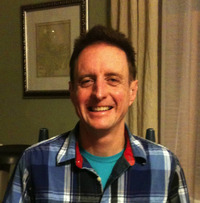 Kalen Cap is a writer living in Columbus, Ohio. Active in animal protection and environmental causes, he often brings such concerns into his fiction writing.
After having a number of poems and short stories published, as well as original plays produced locally, he took up novel writing.