Showing posts from June, 2019
Show all

Check out my stop on the Quest of Fire:  The Gathering Dark blog tour! Quest of Fire:  The Gathering Dark by Brett Armstrong Genre: YA Epic Fantasy/Christian Fantasy Release date: April 2019 Jason is an expert at running from his past. When it catches up, he finds himself hiding in a peculiar inn listening to a tale from centuries past. The story is Anargen's, a teen who is pulled from all he loves to follow his oaths of loyalty to the fabled King of the Realms. Together with his mentor, Cinaed, he rides north on a special quest to mediate peace talks between ancient foes--the men of Ecthelowall and the dwarfs of Ordumair. Nothing goes as planned. Many on both sides of the dispute despise Anargen's Order. Worse, an arcane evil has returned to the North. This "Grey Scourge" seeks to ruin the peace talks and ensure a lost treasure held by the dwarfs is never found by those for whom it is meant. As Anargen's story unfolds, Jason begi
1 comment
Read more 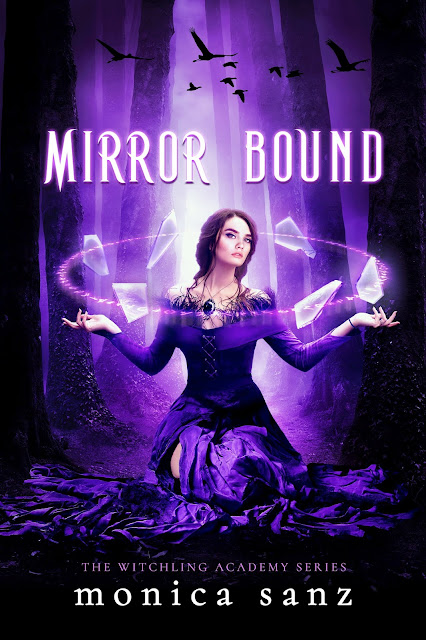 *** COVER REVEAL *** Mirror Bound (The Witchling Academy #2) by Monica Sanz Genre: YA Paranormal/Mystery & Suspense Release Date: September 2019 Entangled Teen Conspirator. Failure. Murderer. Seraphina Dovetail is used to being called all these things. As the seventh-born daughter to a witch, and the cause of her mother losing both her powers and her life, Sera has always felt isolated. Until Nikolai Barrington. The young professor not only took an interest in Sera—he took her into his home, hired her for his moonlighting detective agency, and gave her the one thing she’d always dreamed of: a chance. Under Barrington’s tutelage, Sera can finally take the School of Continuing Magic entrance exam to become an inspector and find her family. Now if only she could stop her growing attraction to her maddening boss—which is about as easy as this fiery elementalist quitting setting things on fire. But when ghosts start dragging Sera into po
Post a Comment
Read more

Bobby Ether and the Jade Academy by R. Scott Boyer Genre: YA Fantasy Adventure “Bobby Ether and the Jade Academy is a thrilling action-packed adventure you never want to end.” —IndieReader 4.5 stars When Bobby Ether is abducted and brought to the secluded Jade Academy in Tibet, monks teach him and other special students how to tap into their Anima—the universal energy that connects all living things. But the headmistress of the academy is secretly testing each student, looking for genetic triggers that can be exploited to create a new breed of humans born with metaphysical powers and abilities. As his abilities increase, Bobby is thrust into a cesspool of conspiracy, lies, and betrayal. A jade amulet left by his clairvoyant grandfather may provide answers, but what exactly is his family’s connection to this mysterious place? Can Bobby master his talents and uncover the truth in time to avoid the schemes? If not, his fate—and the fate of all the students—may be sealed.
1 comment
Read more

This is my stop during the blog tour for Einstein's Compass by Grace Blair. Read on for more information about the book and a giveaway with 13 prizes! This blog tour is organized by Lola's Blog Tours. The blog tour runs from 24 till 30 June. See the tour schedule here .   What if young Albert Einstein had a magical compass that inspired his theories of relativity? In Einstein's Compass: A YA Time Traveler Adventure, a young Albert is given a supernatural compass that allows him to travel through time and space, and find wisdom in other dimensions, including the lost city of Atlantis. But evil forces seek the power of the compass, including a monstrous, shape-shifting dragon from a different age. Can the compass protect Albert from such villainy? Links Einstein’s Compass:   Goodreads - Amazon - Audible - Bookbub - Barnes & Noble - Kobo An Interview with the Author Grace Blair Welcome to Character Madness and Musings. We’re excit
Post a Comment
Read more

Bridges Burned  by Chris Cannon Genre: YA Urban Fantasy Publisher: Entangled Teen Narrator: Julie Niblett Audio Producer: The Audio Flow, LLC  Hosted by: Lady Amber’s PR Since discovering she is a shape-shifting dragon, Bryn McKenna has seen her world thrown into chaos. Being a "crossbreed" - part Red dragon and part Blue - means Bryn will never fit in. Not with dragon society. Not with the archaic and controlling Directorate. And definitely not when she has striped hair and a not-so-popular affection for rule-breaking... But sneaking around with her secret boyfriend, Zavien, gets a whole lot harder when he's betrothed to someone else. Someone who isn't a mixed breed and totally forbidden. And for an added complication, it turns out Bryn's former archnemesis Jaxon Westgate isn't quite the evil asshat she thought. Now she's caught between her desire to fit in and a need to set things on fire. Literally. Because if Bryn can't adapt
Post a Comment
Read more

Detour to Paradise by River Ames Genre: Sweet Contemporary Romance  Lucas Rockworth—a hard-driving force of nature has been ordered by his doctor to take some time off and get his blood pressure under control. You would think buying a cabin in the natural splendor known as Gray Horse Lake, Idaho, would do the trick. All that mountain greenery, crystal blue lakes and rivers, and nature-run-amok had to be exactly what the doctor had ordered. Enter Sarah Burke… The innocently enticing young entrepreneur who’s opening an equestrian camp for children with handicaps. Her initial impression of him is clearly wrong. For some reason, known to the reader but unknown to him, Sarah mistakenly believes that Lucas Rockworth is a shy, sensitive man. After having to deal a lifetime with a dominating older brother and controlling father, she finds these traits very appealing. Her recent breakup with someone who could best be described as a bully has Sarah longing
1 comment
Read more
More posts