New Release: Pete & Daisy by Tani Hanes: He needs a place to live, she needs a baby daddy. **Guest Post-Giveaway** 
He needs a place to live, she needs a baby daddy.

Pietro Santangelo and Marguerite White are students at prestigious Columbia University in New York City. She is a fun-loving, free spirit who finds herself in a bit of a familial bind, he is an exchange student with a chronic case of poverty. They concoct a plan that they think will work, not realizing how much changes with two simple words

Pete merely looked at her and opened a box of books. He took some out and began placing them on the shelves, bending and stretching at his task. He had a nice back, broad shoulders and muscles that could be seen clearly under his light blue T-shirt.
Daisy watched for a minute, fascinated.
"Like what you see?" he asked without turning around.
She jumped at the sound of his voice. "Well, you're the only thing in the room that's moving, you know?" she said by way of explanation.
He turned around to look at her, books in either hand, a small grin on his face. "Of course, what was I thinking?" he asked rhetorically. "And look. We're both adults here, hm?" He looked carefully at her. "The couch we just brought up here cost fifty dollars at the second-hand store, and has to be at least thirty years old. I don't want to sleep on it, and I don't think you're going to want to sleep on it, either."
She shook her head.
"So the bed is nice and big," he continued. "I think we can manage, don't you? We can share the bed." He watched her for her reaction. "I give you my word this is not going to be a problem for me. At all. Is this going to be a problem for you?"
She looked at him. "Really? At all?" She recovered from the unintentional meaning of his words quickly. "No, it won't be a problem for me, either," she said firmly. "We can share the bed."

I'm going to do what I swore I'd never, ever do. So many people who read these days like to have face claims for the characters in the books. This post was originally going to be about a dream cast for Pete & Daisy. But as I started to write, I realized I was having trouble because I already had a real life face claim, for Pete, anyway, and he wasn’t an actor, he wasn’t famous.

For most of my stories, the guy is kind of loosely based on Harry Styles, who has to be one of the most attractive young men on the planet. But Pete wasn't. I mean, he kinda was, because I was in that groove, with the hair and him being a musician, but not really, and I think that's why he’s leapt off the page, and why so many beta readers had such a visceral response to him. I mean, he made so many laugh and cry, oh my god did he make them cry lol! Because he was so real to me. And that made him real to everyone.

So if you want to keep your own version of Pete, READ NO FURTHER, because there’s a picture down there.

I was nineteen, and I met a twenty-one year old boy named Riccardo. We talked for that one night, for six and a half hours, while sitting on the floor of that train, outside the bathroom, I kid you not. Through the window to our left, a moon hung over the Adriatic, giving the whole floor-outside-the-bathroom thing just the right amount of romantic ambiance. It was sweltering, and I remember little trickles of sweat near his temples.

I have no real memory of what we talked about, isn't that weird?

All I remember is a feeling, of discovery, of beginning, of greed, of wanting to talk more, know more. And I remember not being able to look directly at his face because he was too handsome. The left side of my body, the side closest to him, was warm.

So we exchanged addresses when he got off the train, agreeing to keep in touch, and I went off to Greece, then to Japan for school, and I sent post cards to all the new friends I'd made in Europe, including the handsome, interesting Italian with the delicious accent. He wrote back, and we began a correspondence, like on paper, with pens. It was so fun!

Our letters got longer and longer, more and more personal. Three years later, when I was finishing school in Santa Cruz, California, we finally made plans to meet. Keep in mind that at no time was this friendship anything more than that, at least not officially. I had boyfriends during that time, and he had girlfriends. But wowza.

At the last minute, he couldn't come because he got a summer job that was too lucrative to pass up, in his home town, near where his mother lived. His parents were divorced, and he worried about his mom and was very close to her, so the chance to spend a summer with her was also a bonus (I know, right?).

This was before computers, cell phones, all that good stuff. I was worried, then irritated, then pissed off. I told my roommates he'd better be in a coma or dead, that no other excuse would do, and there would be hell to pay when I found out he was carousing at the beachside resort with his new girlfriend or whatever.

So you know what comes next, right?

After three months, I got a letter from Italy in a handwriting I didn't recognize, and when I opened it, a newspaper clipping fell out. It had Riccardo's picture, and I could tell, just from looking at the picture, that he was dead. The article described how he'd been in a car, driving his girlfriend home late at night, when a truck coming in the other direction had crossed the median and struck them head on (I'd begun taking Italian at school, for obvious, nebulous reasons). They'd needed the jaws of life to pry open the car to retrieve his body.

His girlfriend had been thrown clear.

So my world got dimmer for a while, like someone turned down the sun.

I've kind of kept in touch with his mother, though it's difficult, given the language barrier. She's a lovely woman, though of course she'd have to be, to have produced such a marvelous son.

Anyway, all of Pete's mannerisms, habits, even his speech patterns, come from my brief physical memories of Riccardo during that six hour train ride, and from his long letters. I remember his voice, how he sounded, the way he moved his hands when he talked, the way his fingers felt when he touched my face (yeah, he did that 🤗).

So what I'm including down here is just a photograph of a photograph, because I'm technologically challenged, and I apologize for that, okay? This isn't the only picture I have of him, but it is the one that shows most clearly how I see him. I think this also explains why Pete is nearly always shirtless in the book!

I sent this photograph to the woman who drew my cover, and I think she did a good job of capturing him.

And I feel good that I’ve immortalized him in such a permanent way. Is Pete a lil bit perfect. Yeah. Because he was, you know? 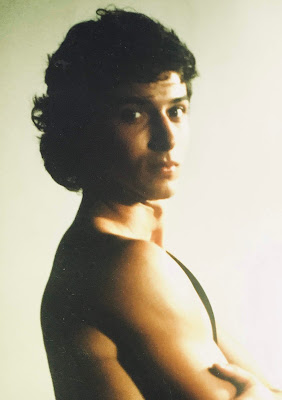 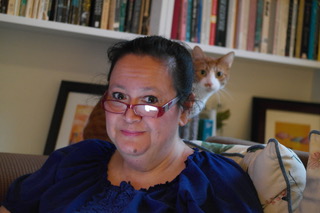 My name is Tani Hanes, and I am a 51 year old substitute teacher. I'm from central California and am a recent transplant to New York City. The most important things to know about me are that I'm punctual, I love grammar and sushi, and I'm very intolerant of intolerance. The least important things to know about me are that I like to knit and I couldn't spell "acoustic" for 40 years. I've wanted to write since I was ten, and I finally did it. If you want to write, don't wait as long as I did, it's pointless, and very frustrating!