Tuesday, September 15, 2015
I was up late, pulling my hair over a scene I've written numerous times. One of those scenes that just never seems right. At three-thirty I decided to stew on it and headed for bed. Sleep overtook me almost as soon as my head hit the pillow, when something started nudging my mind.

Groaning, I rolled over, then noticed Keven from Pretentious standing in front of me, shaking his head.

"I can't  believe you did this to me. I should get the girl. Does this change in the future? Because if it doesn't I'm so out of your imagination."

I lifted my head from the pillow, blinked and stared for a moment, then dropped it in favor of the much-needed sleep. "Do what you want, just leave me be," I said. My mind escaping into the oblivion of Sandman's realm.

"You think that's bad?" I heard a female voice say. She gave my vacation getaway that I created myself to a rich chit of a girl. A Protagonist that should never have been part of my story."

My eyes opened and my pulse raced in alarm. A figment of my imagination couldn't curse me, could she? Go to bed Zylphia I muttered. Reflections has been a done deal for more than a year."

"Then change it," she demanded.

Keven moved in front of her, grabbing for the wand. "This is my visitation, baby girl. Not yours so go back where you came from."

"I'll baby girl you," Zylphia demanded, lifting her wand. Kevin grabbed her wrist and fire shot through the wand zig-zagging around the room.

I covered my head as we all stopped to watch and dodge the rigid bolts.

Kevin let go and placed his hands on his hips. "That was impressive. You could put on quite a show with that thing. Can you sing?"

I rolled my eyes as Zylphia smoothed her dark hair. "I've had an audience eating out of my hand a time or two. What is it you have in mind, modern man?"

Kevin placed one hand on her elbow and led her to his high rise apartment, deep in my imagination. "I'm an A&R Rep, I may have a proposition for you."

I shook my head and laid back down. Not in my story, he doesn't. I yawned and once more succumbed to the power of exhaustion and a dreamless night.


A teaser from Reflections, Zylphia's world behind a mirror.
Zylphia stands on the bottom left. 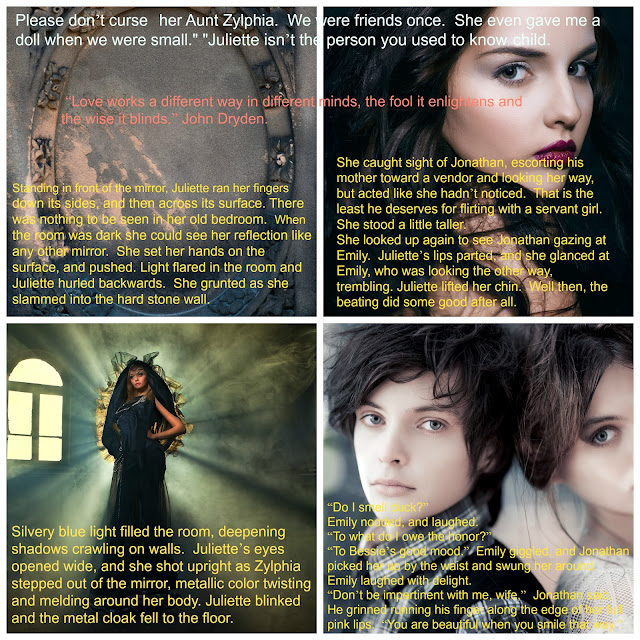