THE SIGN OF THE SERPENT by Majanka Verstraete (The Adventures of Marisol Holmes #2) -- ***Guest Post: Find out what inspired the Author's world -- Giveaway*** 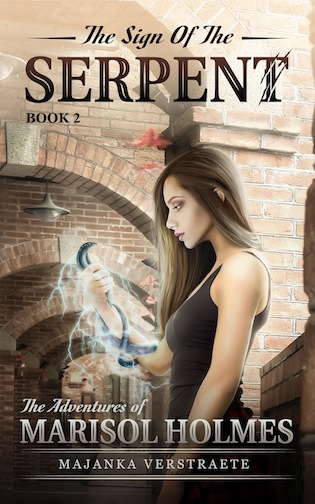 (The Adventures of Marisol Holmes #2)

Marisol is about to lose her heart.

Two days ago, terrible events shattered the very foundation of the Conclave. Now, Marisol Holmes swears she’ll stop at nothing to destroy the man she once loved: her arch nemesis, Mannix.

But when a cryptic clue left by Mannix leads Marisol to a secret room that once belonged to her father, she realizes that hunting down Mannix won’t be that easy. If she wants to catch him, she’ll have to retrace the steps of her own past and discovers secrets that might have been best left buried.

When the hunt for Mannix brings Marisol to London, she teams up again with Roan and Wyatt on a quest for the truth that leads her through the dark alleys of London, to shady shifter pubs, to libraries cloaked in magic, and eventually to an abandoned castle in Scotland that once belonged to her family.

But Mannix is as sadistic as he’s smart. At every turn, Marisol and her friends face harsh truths and deadly puzzles, and risk their lives to uncover a past that should stay buried. With the stakes getting higher and Marisol’s attraction to Roan growing, can Marisol deny what she truly wants, even if it puts her new love on a collision course with her villainous ex?

What Inspires the World my Characters live in.

The world Marisol Holmes and her friends live in is, in part, inspired by the regular world. We have cities like London and Paris that are realistic replicas of the real-life equivalent.

However, the catacombs of Paris, rather than being home to hundreds of corpses, also houses a secret organization called The Conclave, created over a century ago by Marisol’s great-great-great grandfather, none other than the famous Sherlock Holmes. The Conclave is an organization of shifters – jaguars, owls, ravens, bears, serpents, any animal you can think about – who solve crimes committed to other shifters. The shifters have lived in the shadows for centuries, hiding their existence for human kind. Marisol Holmes’ mother, The Duchess, is the leader of all shifters, and Marisol is set to inherit her throne if anything happens to her mother.

That’s the world of Marisol Holmes in a nutshell, but there’s much more than that. What secrets are hidden in the dark hallways of the catacombs? What is the Conclave’s ultimate purpose – is it to solve crimes, or is it something darker? With Marisol being half-human and half the shifter population opposing her claim to the throne, will she ever become the next jaguar queen?

Creating a world that is firmly set in the real world yet adding magical touches to it is quite a challenge. I had visited Paris and London, two important locations in the books, before, but that didn’t mean I didn’t have to do a lot of additional research to make realistic representations of the two cities. Additionally, creating a magical world that was not too different from our real world – where shifters live but are hidden, where crimes are still solved the way a regular police force would solve them, yet slightly different because shifters have enhanced abilities that can help them – those are all aspects I had to take into account when writing the world of Marisol Holmes.

Whereas in the first book, Marisol’s world is still relatively small, here it opens up as more and more layers are unveiled. I love these additions that made her world all the more realistic. I hope you enjoy The Adventures of Marisol Holmes, and that you’re just as excited to discover her world as I am!


Author Majanka Verstraete has written more than twenty unique works of fiction. A native of Belgium, Majanka’s novels explore the true nature of monsters: the good, the bad, and just about every species in between. Her young adult books include the acclaimed Mirrorland (YA Dark Fantasy) and Angel of Death (YA Paranormal) series of novels.