FAIRY IN WAITING (Fairy Mom and Me #2) 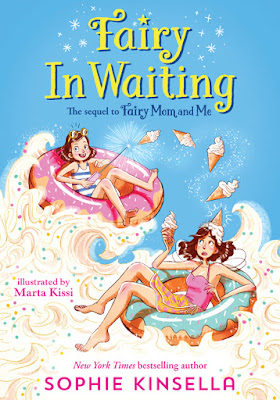 Fans of Sophie Kinsella's sparkling humor and the first book in the illustrated duology will love these next adventures featuring their favorite mother-daughter fairy team.

Ella Brook is used to being a fairy in waiting. It means that one day she will become a fairy with her own sparkly wings and Computawand, just like her mom.

But sometimes Ella doesn't want to have to wait any longer. After all, she helps her mom remember magic codes all the time! If only there were a spell for growing up faster.

Will Ella prove that she's ready to become a fairy? Or will she learn that she doesn't need real magic to save the day?

When my mom turns into a fairy, she still looks like herself but even more beautiful. The sunlight was gleaming on her wings, and her dress was all sparkly and her silver crown shimmered.

“I’m tired of being a fairy-in-waiting,” I said. “I want to be a real fairy and do real magic and save the day.”

Mom laughed. “Every little girl feels that way,” she said. “I promise you’ll get your chance when you’re older.”

Sophie Kinsella has sold over 40 million copies of her books in more than 60 countries, and she has been translated into over 40 languages.

Sophie’s latest novel, Surprise Me, presents a humorous yet moving portrait of a marriage—its intricacies, comforts, and complications. Surprise Me reveals that hidden layers in a close relationship are often yet to be discovered.

Sophie has also written seven standalone novels which have all been bestsellers in the UK, USA and other countries around the world: Can You Keep A Secret?, The Undomestic Goddess, Remember Me?, Twenties Girl, I’ve Got Your Number, Wedding Night, and My Not So Perfect Life, which was a Goodreads Choice Awards finalist for Best Fiction in 2017.

In 2014 she published a Young Adult novel Finding Audrey about a teenage girl with social anxiety and her madcap family, and in January 2018, Sophie published her first illustrated book for young readers about the charming adventures of a mother-daughter fairy duo, Mummy Fairy and Me (also published as Fairy Mom and Me).

Sophie wrote her first novel under her real name, Madeleine Wickham, at the tender age of 24, whilst she was working as a financial journalist. The Tennis Party was immediately hailed as a success by critics and the public alike and became a top ten bestseller. She went on to publish six more novels as Madeleine Wickham: A Desirable Residence, Swimming Pool Sunday, The Gatecrasher, The Wedding Girl, Cocktails for Three and Sleeping Arrangements.

Sophie was born in London. She studied music at New College, Oxford, but after a year switched to Politics, Philosophy and Economics. She now lives in London, UK, with her husband and family.


Giveaway Details:
3 winners will receive a finished copy of FAIRY IN WAITING, US Only.

Want to know more about Sophie Kinsella?
Follow the Tour