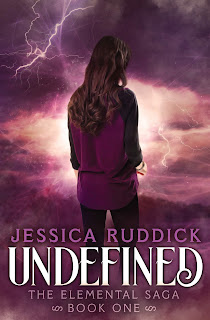 Sophie loves being an elemental. Being able to bend the natural world to her will is thrilling, even if the need for secrecy is putting a cramp in her dating life. Lately, though, her powers have been growing, making it difficult to resist the heady temptation to use her gifts.

Trying to balance the elemental world with having a normal life is tough enough without her overbearing, way-too-perfect, and way-too-good-looking guardian Aidan watching—and judging—her every move. The trouble is she’s not sure where she fits in and she’s sure as heck not ready to conform to stringent elemental rules.

But when secrets about her life are revealed and outside forces threaten everything Sophie holds dear, she must embrace who she is or risk losing it all.

This is a dangerous question to ask me because I hold a master’s degree in English literature. Literary characters may be made up, but they are reflective of humanity and culture at the time they were created.

Ophelia from Hamlet has always fascinated me and in fact, I did a lot of my graduate research on her. She is a character with seemingly little importance, but I would argue that the tragedy in the story is hers. She was a pawn that used in Hamlet’s scheme and became collateral damage through no fault of her own.

Lady Macbeth, on the other hand, is on the opposite end of the spectrum. She is ruthless, calculating, and controlling, so much so that Macbeth wouldn’t have acted without her urging. She talks of being willing to kill her own infant, yet she never actually commits any violent acts in the play and when faced with the consequences of her plans, the guilt drives her mad. Though Lady Macbeth only graces the stage some of the time, she steals the show.

On a less depressing note, I have always been drawn to Scarlett O’Hara. My mother was a huge fan of the book and movie, so I read and watched them as a young teen. Scarlett is not necessarily an admirable character, but I admire her fire, courage, and determination.

Jessica Ruddick is a 2014 Golden Heart finalist for her new adult novel, Letting Go, which was inspired by her own college experiences. She lives in Virginia and is married to her college sweetheart—their first date was a fraternity toga party (and nothing inspires love like a toga, right?). When she doesn’t have her nose in a book or her hands on a keyboard, she can be found wrangling her two rambunctious sons, taming two rowdy but lovable rescue dogs, and battling the herd of dust bunnies that has taken up residence in her home. To learn more about Jessica, please visit her website at www.jessicaruddick.com.