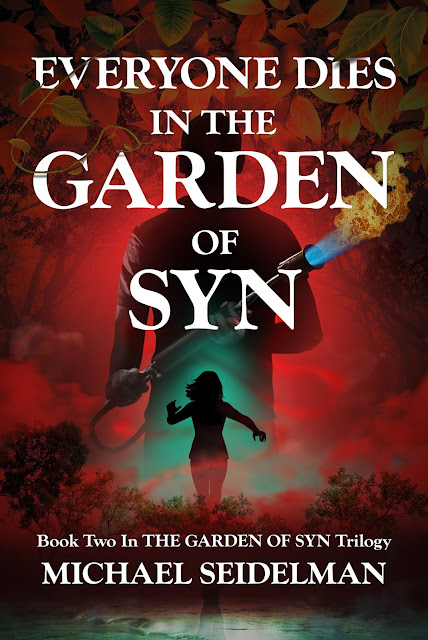 When Synthia (Syn) Wade discovered a secret world where illness and death did not exist, for the first time in her life she didn’t have to worry about her cystic fibrosis. However, a dark truth and a dangerous foe were waiting in the shadows.

Syn must now return to the Garden to save a loved one held captive by a madman and the odds are against her. The secret world is overrun by the terrifying Creepers. Her one-time allies have turned their backs on her. And worst of all, the healing powers of the Garden are no more. This time Synthia fears fighting alone, without respite from her life-threatening illness.

The last time Syn visited The Garden, death was held at bay.

Now Everyone Dies in the Garden of Syn.

An Interview with Michael Seidelman

Welcome to JB’s Bookworms!
Thank you so much for interviewing me!

You're welcome. Tell us a little bit about why you write in your chosen genre, and if you have books in other genres as well.
Books like Alice in Wonderland and The Lion, the Witch and the Wardrobe were among my favourite stories growing up and I had always wanted to write a book or series about a secret world. I wanted it to be more mature than the mentioned books, so it made sense to have a teenage protagonist, hence The Garden of Syn books being Young Adult Fantasy.

What was the title of your first book, and what was/is it about?
My first novel was “No One Dies in the Garden of Syn.” It followed Synthia (Syn) Wade, a teenage girl who struggles with cystic fibrosis, an incurable, life-threatening disease. One day she is pushed into a pond and wakes up in a new world – a mysterious garden where illness and death don’t exist. However, before long, Syn realizes that this apparent utopia holds many dangers and dark secrets and that some things may be worse than death.


The first book seems to be the most difficult to get off the ground. What inspired you to write it?
As I mentioned, I always loved books where characters discovered secrets worlds. I have wanted to write a novel for a long time and knew that when I had my idea for an original story about a secret world, I would write it. As readers get into “No One Dies in the Garden of Syn” they will see that this series has evolved into something that is very different than Alice in Wonderland or the Chronicles of Narnia but those stories were my original inspiration.


What is your most current book? (If different from first book)
“Everyone Dies in the Garden of Syn, which releases on October 23rd.


New books are so exciting. Do you have more stories planned or that you’ve been working on for the future?
I do. I am currently working on the final book in the Garden of Syn trilogy. I have many other books plotted out that I am excited to write after that. I was pumped – and still am - to write the Garden of Syn books. I HAD to get my words onto the page and tell these stories. Whichever book I write next will be the one with the story that I am the most excited to tell.


Can you share a little bit about your main character’s, and what drives them?
The main character in the Garden of Syn trilogy is Synthia (Syn) Wade. Syn has had a rough life. She has cystic fibrosis and has been told by her doctors that she won’t likely live to be twenty-one. When she isn’t spending weeks in the hospital, she spends hours every day taking care of herself and administering treatments. As well, her parents disappeared when she was only five years-old and are believed dead, leaving her an orphan cared for by her aunt. But while she has every reason to mope, she cherishes life - both hers and others - no matter how long hers may be. So when she discovers a world where no one gets sick or dies and she is healthy for the first time in her life, you can imagine her excitement. At first, anyways.

Some stories have strong themes. How important are themes in your writing? Is your theme based on the story, or are your stories birthed from a theme/or themes?
All three of the books in the Garden of Syn trilogy have strong themes of life and death. As well, the books have a strong emphasis on family, whether blood relations or the other people in our lives who we love. Readers will see these themes reoccurring often from the beginning of the first book to the final page of the last.


Is the theme personal for you, or simply an important issue?
Like Syn, I have a real passion for life. Syn’s love and appreciation of animals is based on my own. Her stories of saving bugs and drowning worms are based on my own. Life and death obviously affect everyone but since I have been relatively healthy all my life, obviously that hits Syn much harder. As far as the themes of family, I am very close with my immediate family and I realize how lucky I am to be able to say that. Syn has not been had the fortune to grow up with two parents or to have any siblings so she struggles to appreciate how important some of the people in her life are to her.


What other stories have you written?
I have written several short stores and two children’s books, which I hope to share with readers soon.


I love to bounce around websites because I’ve found I can learn so much about an Author there. Do you have a website, blog, or other place where you showcase your work?
Please check out my website - https://michaelseidelman.com. While I don’t have a blog (I find it takes time away from writing my books), I am active on my author pages on Facebook, Twitter and Instagram so feel free to follow me!


So many Authors are artists by nature. Do you have any other artwork or hobbies you do on a consistent basis?
It does seem that a lot of authors also create music or art, but writing is my sole creative vice.


What were your passions growing up?
Reading, movies and nature.


What are your passions now?
Reading, movies and nature. Some things don’t change 😊

*Jena laughs* Indeed.
Thank you for joining us today. We’re looking forward to seeing the books you’ll be showcasing in the future.
You’re very welcome. Thank you so much for taking the time to speak with me!

Find out more about Michael Seidelman below. 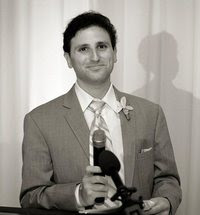 My name is Michael Seidelman. I was born in Vancouver, BC Canada where I continue to reside. When I was growing up, my passions were reading, watching movies, nature and creative writing. Not much has changed since then. In high school when I had an opportunity to write short stories in class, I relished reading them out loud to my classmates who would gasp at the unexpected twists and applaud when I was done. I took several creative writing classes and have continued writing over the years while working in Interactive Marketing.

About two years ago, I decided to take some time off to focus on my writing and work on a Young Adult trilogy. The first book in The Garden of Syn series – No One Dies in the Garden of Syn – will be released on April 26th. Meanwhile, I am working hard on the second and third books in the series.

Getting up every morning and sitting down to create new characters and bring new worlds to life is the most fulfilling job I have ever had. Beyond the trilogy, I have many ideas plotted out and I look forward to sharing them all with the world!