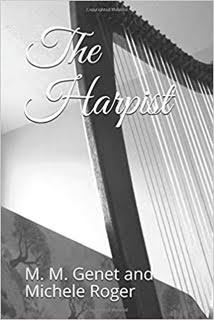 Elizabeth O’ Toole has finally gotten her life where she likes it. She plays harp for the local symphony. She shops high fashion labels at vintage stores. She’d recovered from her tragic past and she has her friends Catherine and Alan to thank. After suppressing her extra sensory perception with intense study of her harp, she finds her music is suddenly connecting with a new audience; particularly a young girl, Emma Brady, who has been murdered. With each ghostly visit, the hauntings grow more intense and more terrifying.

Investigating the case is ruggedly handsome Detective Mike Flannery. Known for his fast thinking and bravery on the force, he has his own past and reputation he’s trying to keep at bay. Coming from a rich and powerful family, he’s out to prove he can fight for justice ny being a good cop rather than moving up the ranks through nepotism. Mike and Elizabeth’s paths collide at Emma’s funeral.

The daughter of a Senator, the family wishes to the investigation done quickly and quietly. Mike can’t close the case because some of the pieces just don’t fit together. Elizabeth holds the key to the murder mystery but will be believe her and her unusual connection to the dead victim? Will she and Alan find a way for the dead to tell their stories?

A novel that spans two worlds and two time periods, this book is one part science fiction, one part paranormals mystery and all romance. Intertwined is a love story of the most unlikely couple. A killer is on the loose and both Elizabeth and Mike are on the hit list. If they work together, Mike just might solve the case before more people fall victim. But he can’t do it alone. He’ll need the help of Elizabeth as she connects her living world to that of the dead. She’ll need Mike’s protection and he’ll the talent and bravery of The Harpist.


“Being a composer is a lot like being a judge. A composer sits at a desk and takes his or her knowledge to write some of the world’s most beautiful music. It takes brains, there’s no question, but in no way does it take courage. It’s always bothered me, really. How can a composer win an award for something they’ve never played themselves as a musician?”

“Mike, on the other hand, has chosen a job far more courageous than yours. His knowledge of the law is played out in split second, life or death decisions. Just like a musician who takes the risk and walks out on to a stage to play some of the most complicated music in the world for people who may or may not appreciate it. A cop goes out in to the public every day and tries to protect the public by solving cases for a public who often do not celebrate him. Unlike you, he rarely gets credit, or added pay or press coverage. It takes both brains and backbone to do his job.”

When she’d finished, it was Mike’s turn to blush ever so slightly as he stared at the marble tile that met the end of his shoe. Maureen busted out in a fit of tipsy laughter. “You’ve lost this one, Your Honor. Better give them what they came here for.” A few minutes later, Mike and Elizabeth were standing outside in the crisp, early evening air, empty handed.

Elizabeth laughed. “It’s been a while since a set of parents have thrown me out of my boyfriend’s house,” she said sarcastically. She reached out with her knitted, woolen mitten and grabbed his hand. “I’m really sorry.”

“Dear God,” Mike laughed. “For what? You just bested one of the toughest judges in Oakland County and you’re sorry? Besides, he’s hiding something.”

“I’m sorry for you. It must have been a terrible childhood.”

“If only I’d known you back then. I could have hired you to be my body guard.” They both smirked.

“Drive me home?” she asked.

“Wasn’t there something about you buying me dinner if I stayed through your experiment?”

“I just bested your father and you expect me to buy you dinner? I hate to tell you this, but you’re kind of bad at this,” she teased.

“My redeeming qualities make up for it,” Mike argued.

“Really? There’s redemption at the end of this crap evening?”

Without answering, Mike put his hand on the small of her back and pulled her towards him. He brushed the wisps of her hair blowing in the crisp air. Before Elizabeth could worry if Judge Flannery was watching from the full length window, Mike leaned in and kissed her. She returned his kiss; feeling the heat travel down her neck as her heart raced. They kissed until they both pulled away, slightly breathless.

“I’ve never been much for faith and redemption but you might just make me a believer,” Elizabeth swooned.

Mike rubbed the end of his nose near her ear. “There’s a very strenuous conversion process,” he teased. “I think we might need to start tonight.” 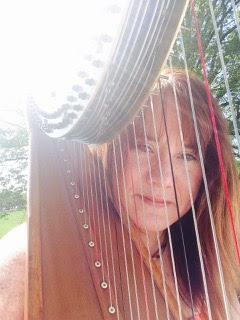 Michele Roger is an author and harpist.

She is published under different pen names for her work in horror, children’s literature, non-fiction and Food and Travel.

When she isn’t writing or promoting a book, she performs as a harpist. 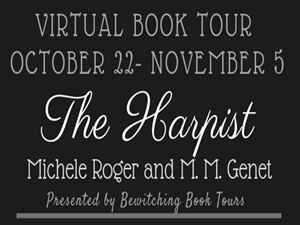