Guest Post with Keeper of the Watch Author Author Kristen L. Jackson: What she loves most about science fiction/fantasy, and thier affect on her as a child. - Giveaway 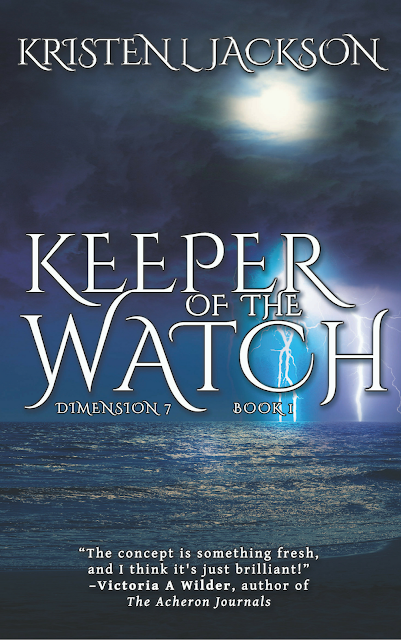 Chase Walker is beginning to doubt his sanity. From the moment he turned eighteen, a strange paranoia has taken over his mind. It all started the moment he discovered his uncle’s old watch...

The watch calls to him. Though it beckons, he resists. His body strains toward it, blood pulsing, heart pounding in a mysterious and primitive need to connect with his uncle’s old beat up watch.

When sexy and mysterious Alyx saves his life, she promises answers. She talks of dimension travel, and wears a magical watch of her own…

We asked Kristen L. Jackson what she loves most about science fiction/fantasy and their effect on her as a child.

Here's what she had to say.


I love to answer this question, and it’s something I’m asked a lot! To fully understand why I love science fiction/fantasy we’ll have to travel back in time, but I promise we’ll stay in this dimension!

When I was a little girl, I can remember watching Disney’s Escape to Witch Mountain. The children in the story have special powers and could move things with telekinesis. That idea fascinated me. I spent countless hours staring at things, trying to discover my own powers. Trying to move things with my mind alone. As far as I know I was unsuccessful…

A few years later, my parents took my sisters and I to see a movie that changed my life. I was probably 10 or 11 at the time. That movie was E.T. And that’s when my love of science fiction truly grew. An alien that could learn to talk and bond with the main character? Sign me up! I went back to see the movie two more times in the theater. Other girls my age carried around dolls. I carried my faux leather ET doll around until the leather rubbed off. He was right up there with my talking stuffed Daggit from Battlestar Galactica. Yep. More sci-fi.

I grew up with the original Star Wars. A New Hope. The Empire Strikes Back. Return of the Jedi. I think it’s fate that I was born on the officially declared Star Wars day… May the 4th be with you. Later, my favorite show was Star Trek, the Next Generation.

And through it all, I’ve always loved reading. If you think about it, lots of children’s books can fit into the science fiction/fantasy genre. Talking animals? Inanimate objects showing emotions? Imagination. A key component of science fiction. My favorites back then were Charlotte’s Web and Bunnicula.

As a teenager, my favorite author was Dean Koontz. If you’re not familiar with his writing, and you love science fiction like me, I highly recommend Watchers, Strangers, Lightning, Phantoms…I could go on.

I love writing sci-fi/fantasy because anything can happen! The possibilities are endless. If you can dream it up, then you can make it real within the context of the genre. People often ask me why I write science fiction. I ask … why not!

Kristen L. Jackson lives in Reading, PA, with her husband, two grown sons, and three large-breed dogs. She has been a teacher for over 20 years, and writing for children of all ages is close to her heart. Her debut young adult sci-fi novel, KEEPER OF THE WATCH, is available now, and her children's picture book, JOCELYN'S BOX OF SOCKS, will release in late 2018/early 2019. She enjoys writing, reading, and spending time with her family at their cabin in the Pocono mountains of PA.