Review: How I Magically Messed Up my Life in Four Freakin' Days

Ever wanted to grow a five-story tall flower in central park? How about fight a deadly battle under the subway tunnels of Manhattan?

Don't worry. I never wanted to either. But if you're ever being chased by ladies made of mist and you have to save the girl with the sparkly eyes you've never had the guts to say actual words to, there's an app for that.

I found a magic cell phone, opened an app I shouldn't have, burned down the set shop for my high school's theatre, and it was all downhill from there. A drag queen seer who lives under a bridge is my only hope for keeping my mom alive, and I think the cops might be after me for destroying my dad's penthouse.

But it gets better! Now I'm stuck being the sidekick to the guy who got me into this mess in the first place. It'll be a miracle if I survive until Monday. 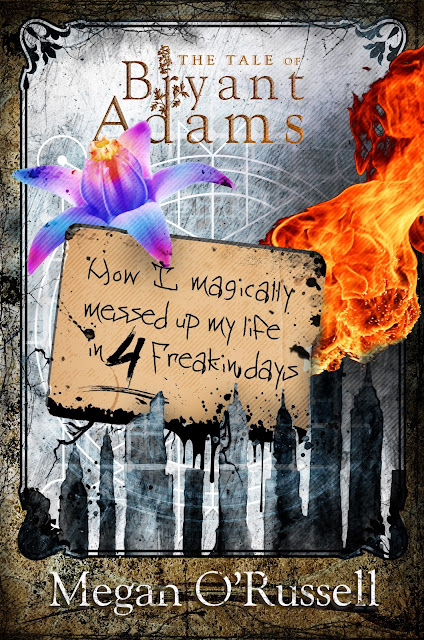 I haven't done a YA review in a while, but the title, How I Messed Up My Life in 4 Freakin' Days, immediately grabbed my interest, and indeed, the character does manage to ruin his life in 4 freakin' days. The cover is a serious attention grabber too, so I sat down to read.

There are a few editing issues in a specific area of the book. It's pretty minor, and doesn't interfere with the story, so I didn't find it an issue. I know it bothers some people, so I'm throwing it out there. The other 99% of the book is pretty perfect.

I found the storyline to be interesting and unique. Main character Bryant finds a phone with magical powers, and after a couple of mishaps, he and his friends, Devon, and Elizabeth try to decide what they can do with the evil device. Megan O'Russell's voice is rhythmic and really nails the personality of Bryant down with it. He's a typical boy, going through school, has a crush on a girl, and a Mother who volunteers him for things without asking. He spends most his time with his best friend Devon, although he's a little bit jealous of Devon. The story unfolds with a good deal of comedy, as well as some soul searching. This is a little vague on how the plot unfolds, but anyone that has read my reviews knows I don't want to accidentally drop spoilers.

The story has a beginning, middle, and end, with no cliffhangers, and I found it a pleasant read. I would have liked for it to go a little further than it did at the end, but it's solid the way it is. I think this would be a great read for middle grade readers, as well as teens. There is no sex, and while there are a few curse words, it's minimal.

The characters are well thought out with their own personalities and struggles. Bryant is insecure and has some self-esteem issues. He's been in love with the same girl for a long time, but sees no reason why she might be willing to go out with him. It doesn't make it easier that his best friend Devon is very popular, and smooth with the ladies. The two are good friends and very loyal to each other. Elizabeth? To say much about her place in the story would definitely drop some spoilers. I'll just say that she's intelligent, and a drama student in Bryant's Mother's class. Bryant's Mother is protective, and supportive of Bryant and his friends. Megan O'Russell did a great job with the characters.

If you know any teenagers that like to read, this is definitely a book worth reading.

Megan O'Russell is a native of Upstate New York who spends her time traveling the country as a professional actor. Megan's current published works include YA series The Tethering and Girl of Glass, as well as the Christmas romance Nuttycracker Sweet. 2017 projects include The Tale of Bryant Adams: How I Magically Messed Up My Life in Four Freakin' Days, and The Chronicles of Maggie Trent: The Girl Without Magic.
For more information on Megan's books visit MeganORussell.com.