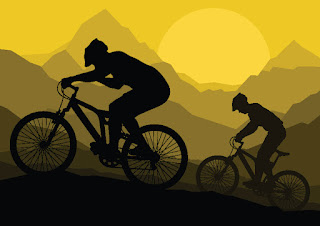 I've been thinking for a while now that I need to get things in order. Healthier eating, more functional writing schedules, blogs with more output and focus. I have three, along with my website. A friend of mine worked on habits one at a time last year, using the 21 days plan. I was impressed with the idea, so I decided to do the same one day, but I couldn't remember the number of days, so I googled it, and found that the numbers have changed. It is now believed that it takes sixty-six days to make a habit. That's a lot more than twenty-one. What's worse is I told a friend, and he decided it's more like ninety.

I think statistics are based on what the researches see as average. In college we were taught to look at who researchers tested. I didn't do that this time, because like my friend said. It took him longer to quit biting nails, and stop smoking. My guess is that we're all pretty different, we just need to figure out how many days will lock in a habit for us.

My new program will start at sixty-six days. It seems like a good goal for me, and twenty-one days is not that long. If I need more than sixty-six, I can always extend the process. I haven't decided what all I'll be working on, but here's a list of five of the goals I intend to accomplish and why, if that isn't self-explanatory. This year would be great, but if I spill over into twenty-eighteen, I'm okay with that. As long as I get it all done, and form some good habits.

We all have things we could work on.

-- The first goal is writing, because it's what I love, and what I agreed to do. Some time ago, my husband worked a job where he traveled a lot. He liked me to join him, and it was fun, but work gets in the way. So, I agreed to write full-time, but I've fallen off the wagon a couple of times, and I'm not as functional as I was in the beginning. It's time to keep up my side of the bargain.

-- The second goal is healthier eating. This is a strange thing in our house, since my husband and I are diabetic, although he's managed to control his sugar with the Keto diet. He eats fat, with as few carbs as possible. He's lost more than eighty pounds, but it's such a major change for me. I think when the time comes it will be all about chicken and vegetable recipes. We eat some keto recipes anyway, since that's the path he chose.

-- I might flip the third goal with the second. It is to simply be more active. Health club, walks, the beach. It picks up the metabolism, and that will be helpful for any goals I pursue.

-- Next is better control of the finances. We like to play games on occasion to save money, and have a competition of who can save the most in a specific period of time, as I type. There are other things we can do though. Like making a list that will save penny's; turn out the lights, walk or bike instead of taking the car, wear a sweater to use less gas for heat, and so on. We also liked saving all our five dollar bills, but we rarely carry cash these days. Another way to spend less since we both have an aversion to credit cards. I've recently started using e-bates.

-- My fifth goal will be to learn and understand better marketing techniques. Almost everyone has to do some marketing these days, and some of us are better than others. I fall in the 'others' category. I'm a writer, but need to learn how to be a salesperson. I do a few things, but I'm a long way from amateur, let alone Guru. I hope to open an online store this year, where I can sell my books, books from authors I like, and soaps and trinkets. I love to make soap, and would do it everyday if I had the funds and the room. And that takes me back to 'better control of the finances'.

What goals and challenges do you have?