This post is part of a virtual book tour organized by Goddess Fish Promotions. Geoffrey Saign will be awarding a $25 Amazon or B/N GC to a randomly drawn winner via rafflecopter during the tour. Click on the tour banner to see the other stops on the tour. 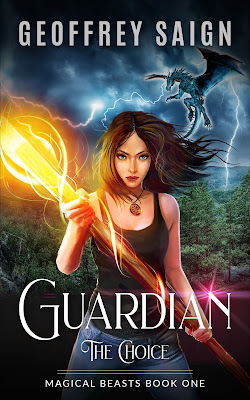 When wildlife prodigy Sam and her crush—quirky handsome Jake—are attacked by a dragon assassin, Sam discovers her secret past. A past connected to a supernatural giant cat and a glowing faerie.

Sam and Jake must capture a magical golden dragon—or Jake dies. Can Sam can save the man she loves? And will she have to die to do it?

But everyone wants the golden dragon, including the powerful Evil One, who has been hiding for centuries and has sworn to destroy all of life. No one can be trusted. Death Matches and ancient secrets test the guardians as never before.

Sam fears that whatever she does, she won’t be able to save Jake…nor stop the Evil One.

Guardian: The Choice was selected as Finalist in “Fantasy,” and “Young Adult” category winner!

And Guardian: The Choice was selected as the “Outstanding Young Adult” category winner!

Read an Excerpt from Guardian: The Choice

Biting his lip, Jake grips the staff beneath my hands. “Okay, Sherlock. Got it figured out?”

I feel warmth in my hands and a vague memory returns. “I hope so.”

His eyes widen. “You hope so? I don’t want to end up in Africa or on top of a skyscraper! What if we end up inside a rock? I mean we’re turning into what? Beams of light? Maybe we’ll end up off the planet. What if they’re aliens? I mean they are anyway, right?”

He’s quiet for a few moments. “Weird, I think I remember this too.”

The soldiers stop at the edge of the meadow, aiming their weapons at us, while Macy’s voice booms at us. “Drop the staff now, Samantha and Jake.”

“Forget you, Macy.” Jake pushes me around so his armored back blocks me from Macy’s VIPERS. “Hurry it up. They can still Taser my legs. And I have to tell you, it was not fun the first time.”

“Thanks for taking one for the team, Jake.”

He squints at me. “I just don’t want to take another one for the team. What kind of team are we anyway? Batman and Robin? They both get beat up a lot.”

“How about Ant-Man and the Wasp?”

“That’s a little better.” His eyes light up. “They were romantic, you know.”

We lift WhipEye off the ground, but Taser darts bite the dirt on either side of us and we freeze.

Geoffrey Saign’s love of wildlife led him to write the award-winning fantasy series, Magical Beasts. He often experiences the magic of nature and wildlife while hiking and swimming. He has a degree in biology and has assisted in field research on hummingbirds and humpback whales. Geoff loves to sail big boats, hike, and cook—and he infuses all of his writing with his passion for nature. As a swimmer he considers himself fortunate to live in the Land of 10,000 Lakes, Minnesota. See what he’s up to at on his website.

Guardian: The Choice is on sale for $0.99 during the tour:

Get your copy here: