Check out my stop on the blog tour for The Call of Death by R.J. Garcia!

The Call of Death 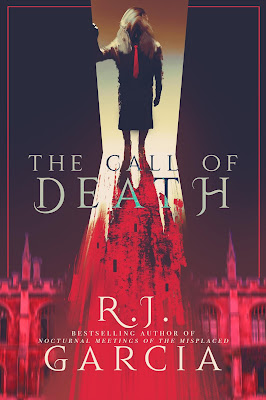 Fourteen-year-old Hannah Priestly crashes into a terrifying future. She wakes up in her dorm room now knowing the name of an infamous serial killer, Norman Biggs. He will attack her in the future unless she and her three male friends can change fate.

Hannah is a suntanned, obsessive-compulsive California girl dropped off at an English boarding school by her celebrity mother. Hannah has difficulty understanding algebra, let alone her increasingly dark visions. Rory Veer is Hannah’s smart, easy-going and romantically challenged friend and school crush. When Norman Biggs unexpectedly appears in Rory’s reality, terror is set in motion. It is Rory who must acknowledge a past he has denied if the mystery is to be unraveled.

The Characters from The Call of Death Interview their Author, R.J. Garcia

You always hear it is okay to talk to yourself as long as you don’t answer. With that being said, the main characters from my new novel, The Call of Death are going to interview me. This is perfectly acceptable because they are real people and not just voices in my head. Well, sort of. If you’re a writer, you know what I mean. At least they feel real to me and hopefully you will get to know them too.

The first character I would like to introduce to you is Hannah Priestly. She ages from 14 to 16 in the course of this coming of age suspense story. Sorry Hannah I have given you some of my obsessive-compulsive tendencies but on the bright side I made you rich. She is a California girl dropped off at an English boarding school by her celebrity mother. Hannah not only has to deal with her newly discovered psychic abilities but also needs to learn how to be comfortable in her own itchy skin.

Rory Veer is Hannah’s romantically challenged love interest. He also ages from 14 to 16 in the novel and can be both frustrating and lovable. He is a chin down and grades up kind of guy. He goes through loss and must learn to deal with his feelings or be crushed under the weight of them.

Hannah: First of all, I wanted to ask you why I felt so drawn to an English boarding school in the first place?

R.J. : I think you were drawn to the idea of it and the order it brought to your life. And you were a little obsessed with Harry Potter growing up, who wasn’t?


Hannah: Why couldn’t you have made Rory more intelligent?

Rory: I get quite good marks. A better question would be why did you have to put Norman Biggs in the story at all?

R.J. : While you both embodied the innocence and potential of youth and possibilities; Norman personified the polar opposite. He had little opportunities or nurturing and let go of his innocence early on, partly to survive in the dark environment he was raised in. Unfortunately, he learned to like the darkness.


Rory: You killed people in this book. Maybe you fancy the darkness like Norman. Is that it?

Hannah: Yeah, what is your problem, lady?

Excerpt from The Call of Death

Abruptly, Paul grabbed my hand, pulling me along the narrow strip of space squeezed between the marsh and dunes. Then he let go and started drawing another circle in the sand around us. He came back over to me. We were close. Our faces almost touching, our breath one. Under that gold moon, I was oddly attracted to him but only at that moment. He instructed, “Make a wish, Hannah.”

“This is stupid,” Christian mumbled.

“Fine, I will.” Paul lowered his head and smiled before a straight line of blood bloomed under the blade. He shook his index finger, and dark drops fell to the sand. I grimaced, but he laughed.

“Is this sacrilegious?” I wondered out loud, nervously bringing my hand over my mouth.

“How could moonlit ceremonies and bloodletting be sacrilegious?” Rory asked. His voice again dry and sarcastic.

Christian and I exchanged a glance.

Making the sign of the cross, I barked, “You’re crazy. Just wish for something, Paul.” I wanted out of the circle.

My eyes explored their faces. Christian’s mouth melted into a hard frown, and Rory had his signature confused face, eyes squinting and lips slightly parted. It should have worried me, but I didn’t care. I let go.

“Me too.” I closed my eyes, concentrating on my wish. Then the world seemed like a collapsing star, and for a millisecond, I swear I floated away.

R.J. Garcia is a wife and proud mom. She earned her MSW and worked with foster children and as a school social worker. Writing has been her other great love. She has published several non-fiction pieces. She has been writing short-stories for as long as she can remember. To her amazement, those short stories became novels! 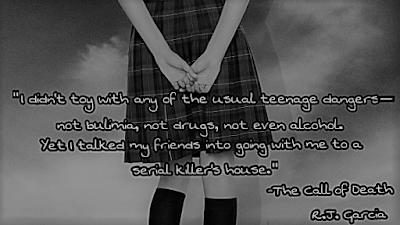