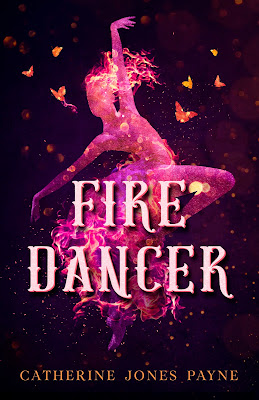 So You Think You Can Dance meets Storm Siren

Fire is a dangerous magic.

Sixteen-year-old Kyla is preparing for the test of her life: a high-stakes dance competition to win the role of principal dancer in the fire festival's elite troupe. When she's not sneaking off into the woods to practice forbidden magic, that is. Among her people, only the men are entrusted with the mysteries of magecraft. But Kyla's been learning in secret for ten years, and she's never backed down from a challenge.

As danger ignites, Kyla must maintain a tight control on her magic. For more than her ambition is in peril. She must stay a step ahead of her enemies—a backstabbing dancer, a repressive council, and a crazed arsonist. If she can't withstand the inferno, the people she loves most will die.

Fire Dancer is the heart-pounding first novel in a trilogy of YA elemental fantasy books. If you like fierce girl power, slow-burn romance, and harrowing danger, you'll love Catherine Jones Payne's fire world.

Plunge into a page-turning adventure perfect for fans of A.L. Knorr, Mary Weber, and Cassandra Clare.

“Excuse me.” I pushed through the mass of bodies until I came face-to-face with him. Phoenixflies fluttered in my stomach.

“You were perfect,” Nolan said.

My heart beat faster. “You saw it?”

I tucked my hair behind my ear. “Could you tell who I was?”

“Of course I recognized you,” he said. “You were the best dancer there.”

I laughed and tugged his arm to lead him away from the stage. “Now I know you’re lying. Breanna’s our best dancer, and Shayla might be better than me.”

My cheeks were surely bright red. I took his hand. “Come on,” I said. “Let’s look at everything.”

It was always a risk, walking around the festival with Nolan, but with all the Fintan focused on making the festival grand, no one had ever noticed me walking with an outsider. Or if they noticed, they didn’t say anything. We’d done it on many occasions since we’d first met as children at this very festival.

But I still kept an eye out for my mama. I didn’t want to explain Nolan to her yet—not until I’d figured out how to get his family readmitted to the clan.

Mama worried all the time.

Papa knew that Nolan and I were very good friends—I didn’t keep much from Papa. But he didn’t know about my dream to bring Nolan’s family back into the clan. Some hopes were too fragile to speak aloud.

Nolan and I cut through the crowd to the edge of the festival, past the smell of roasting meat, past the booths selling trinkets and potions made from ash, and past a storyweaver enrapturing the crowd with the help of fiery strands that flowed from his fingers. Someday, I vowed, I would practice that level of magecraft.

A vision unfurled in my mind, of Nolan and I taking our mage tests together, of entertaining the festival attendees with magecraft side by side. Then I rolled my eyes at my own thoughts. The council would never let me do magecraft in the festival—but they couldn’t stop me from learning in secret. And I wouldn’t stop. I was too drawn to the magic. The elemental fire serenaded me, begging me to plumb its depths.

When we reached a quiet spot, far from most of the festivalgoers, we sat together at one of the long tables, right next to a glass jar full of fireflies. The insects faded in and out, glowing one moment and invisible the next in the dark.

Ten yards away, a mage suspended a ball of flame in the air to the delight of a thronging crowd of children. He moved the position of his hands, and the ball elongated and took shape, becoming a fiery dragonbeast.

The Fintan told stories about two kinds of dragons. The first, the dragonbeasts, which had the cunning of a person and the personality of a cat, were great lizards that flew and breathed fire. They hadn’t been seen in a thousand years, some stories said. The elders said there had never been any such beast. But I didn’t believe them.

The second kind of dragon were warriors, who wielded the fire with incredible power, bonded to it in a truer, deeper way than our most talented mages could ever hope to be. The dragon-warriors had vanished from the earth around the same time the dragonbeasts did. If the stories were to be believed.

I chuckled. No point mourning something I’d never see.

The children squealed, and I took Nolan’s hand.

“What’s your favorite part of all this?” I asked.

I rolled my eyes. “Be serious.”

“I thought that should be obvious. Seeing you dance.”

“Besides that,” I said. “You’d come to the festival even if you didn’t know me, wouldn’t you?”

He ran a hand through his sandy hair. “It feels like home, I guess. I mean, don’t get me wrong, my papa’s always made a good life for us. Home is with him and my sister and my brothers, as well as the people my papa takes under his wing. There’s usually a few of those at any one time. But it’d be nice to have a community, you know? Something like this where we’re all working together for a greater purpose. I mean, I guess my papa . . .” He fell silent.

He shook his head. “Nothing. Sorry. Just thinking. I . . . I guess I just love seeing all the beauty. Everything that the Fintan have built. Even though I wasn’t raised here, it’s where I come from. I want to belong here.”

He put his arm around me, and I leaned my head against his shoulder. “I know you do, Kyla. It just can’t be. The council won’t allow it. I know that. Deep down, I think you do too.”

In the distance, the first of the sky lanterns rose up from the earth to kiss the sky. Though Fintan fire blazed in every color imaginable, we used only golden-white, blue, and purple flame in the lanterns.

It always took my breath away.

More lanterns rose into the air, the thin paper globes held aloft by the heat of the flame. They glimmered as if a thousand stars had come down to greet us and were now returning to the heavens.

“This is my favorite part,” Nolan whispered. “Besides seeing you dance.”

“Mine too.” We sat there, in the silence of that perfect moment, for a long time. I thanked the eternal flame that such bliss existed in the world.

When the lanterns burned through their fuel and fell dark, sinking from the sky in soft, silent waves, I focused my gaze on the glassed-in fireflies. “You know I’m not an optimist by nature, Nolan. It’s not that I have blind faith that everything will work out. It’s just . . .”

That I won’t give up until it’s done.

“Kyla Brannan, what are you doing?” screeched a voice behind me.

Catherine Jones Payne is a Seattle native who loves the written word, international travel, crashing waves, and good coffee. Her earliest memory involves pulling up a rolling chair to her parents’ old DOS computer—while wearing a tiara, naturally—and tapping out a story of kidnapped princesses. By day she’s the managing editor of Quill Pen Editorial and the editor of Splickety Magazine. She lives in Waco, TX with her historian husband, Brendan, and their cats, Mildred and Minerva.