Check out my stop on the Remote by Lisa Acerbo blog tour! 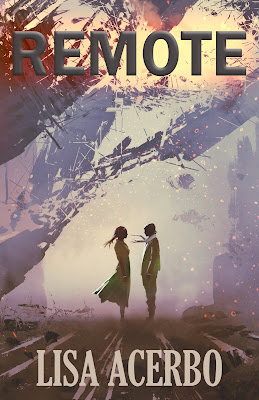 When technology fulfills every dream, reality is a nightmare.

Below the streets of New State, the Grounders fight to remain free of the technological control of the world above. When dusk falls, Wren risks her life by entering the capital city as a raider to secure resources for the rebellion. Each step further inside puts her life in jeopardy from New State’s deadliest weapons – Phantoms. More machine than human, tortured until devoid of emotion and caring, Phantoms have only one objective. Kill. And they do it with exacting precision.

Wren is good at her job as a raider and committed to the cause until she meets Codex, a New State citizen who doesn’t quite fit her preconceived expectations. After a couple of awkward encounters, he shows her the meaning of hooking up—a computer simulation that allows people to live out their fantasies—without the complication of emotional entanglements or physical reality. But what Wren feels for Codex is very real. And it’s punishable by death.

As she and Codex grow closer, Wren convinces him to leave New State for the underground. But unrest between New State and the Grounders escalates, and Phantoms move in to destroy her world. Nothing goes as Wren planned. Families are arrested, loyalties are strained, and Wren’s forced to choose between her people and her feelings. The wrong choice could mean the end of her people, and reality could slip away—forever...

★★★★★ Science Fiction, Romance, and Lots of Action - Remote is one of those books that just hooks you from the first page… - Voracious Reader

★★★★★ Enjoyable & Innovative Novel - Enjoyable Sci-Fi Romance that I highly recommend….5 stars. Overall, novel was well-paced, characters are well-developed, and story is detailed but not too verbose. Although the relationship that emerges between [Codey] and [Wren] is predictable, it did not feel forced or rushed. - Janine

★★★★★ Remote is quite the page turner! - A unique and intriguing blend of science fiction and adventure that really engages the reader and makes one think long after the last page. This book is in the YA genre but will appeal to readers of all ages - there's honestly someting for everyone. It also is poised for further installments and here's hoping we can delve into this thrilling world soon again. - Frank T

Remote is about a world divided by technology. Those who live in New State are controlled by it and those who live underground rebel against it.

The world building in this book is really good peeps. It may be a disturbing prediction of the future though. So many are dependent or addicted to their phones or other tech that even now there is a growing concern over the disconnect between people, and kids having trouble dealing with how to interact with their peers.

In this book people have become completely dependent on tech and barely come back to reality. They are allowed to do anything they want while in cyberspace but must be almost perfect citizens when not hooked up. Those in control make tech upgrades the most desirable things to have and people get artificial limbs to be better at their jobs or for cosmetic purposes. Grounders refuse to live hooked up all the time and get chips implanted in their brains. This book really brings in to focus the question of how much government control is too much? How do you trust the ones in control to make the right choices?

Wren forces Codex to face the reality of his world, and they both find that things are way worse than they thought. New state has been “upgrading” their defenses, and the truth of the programs they run is truly vile. While Wren tries to do what is right, she starts getting threats that escalate as things get worse. The biggest question of course is, is Codex worth it? There is a large amount of violence, as Wren's world is nowhere near safe, and there is no explicit adult content but a little nudity.

“Clear here. Ready to get this night rolling,” Wren said into the headset, maneuvering down the hidden steps.

“You’re the only person I know who happily goes into New State,” a static voice replied.

“For the cause,” someone whispered into the headsets for all to hear.

“For the cause,” came a reply from the raiders.

She chuckled to herself as sure steps brought her off the mountain and onto the barren landscape. Wren took a moment to enjoy the moonlit March and think about her job as a raider. She rarely saw the sun, so even the glimpse of the night orb hiding behind a sheen of clouds brought her intense joy. But it also worked to her advantage. Raiding New State took skill and effort. Darkness added to her stealth. Few luxuries found their way to the underground caves where she lived. Even some basic provisions like food and medicines had to be commandeered. “If you want it, you’ll have to find a way to get it,” her father had told her from a young age.

She approached the small group of raiders, all of whom had exited the mountain range separately for safety and listened to the whispered arguments about the best picking in New State. Wren didn’t join the debate.

She thought back to the conversation she had before leaving for this mission. One of the Grounder leaders, whom just happened to be her father, cornered her on the way out.

“Wren, I got a complaint from your commander. You need to follow the rules as written for the raiders. It’s the only reason your mother and I let you join the group.”

“I need to explore New State and go where others don’t. How else are we going to understand and defeat them?”

“We have other ways,” her father said.

“Excuse me, Head of State Rafe,” She watched his expression sour as she used his official title with his first name. She loved annoying him. “My searches lead to the best discoveries.”

“I won’t care what you find if you end up dead. Promise.”

Wren had let the silence grow. “Fine.” She had no plans to keep her promise. 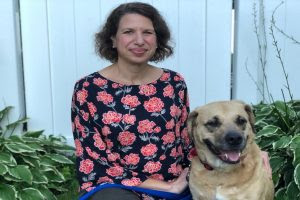 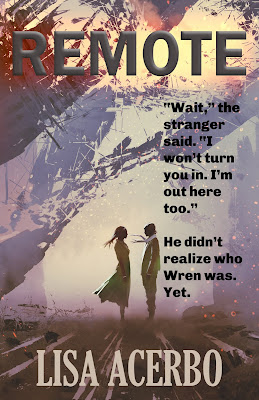