Rameon's Destiny: Realms of Chaos Book One, by J. W. Garrett: A boy seeking adventure… A world that's dying… A war that may have no winners… ***Excerpt-Giveaway*** 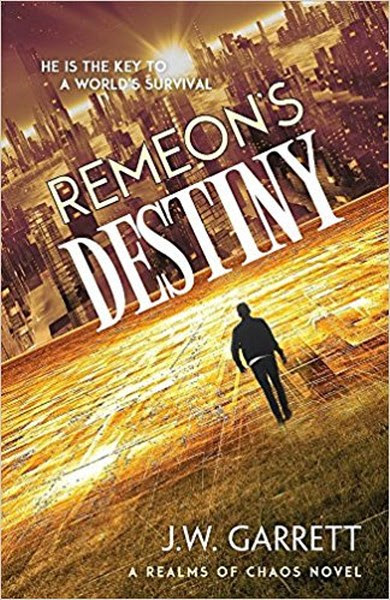 Thomas longs to escape the drudgery of farm life, dreaming of adventure and running away from his demanding parents.

Planet Remeon is on the brink of destruction, fighting a crippling disease that threatens to wipe out their civilization.

Thrust into their world, Thomas is caught in the middle of telepathic mind games between the Day Watchers and the Night Dwellers.

Alliances will be broken. Thoughts will be controlled. Will anyone survive?


THOMAS AWOKE WITH a jolt as the stench of urine and animal remains brought him to the present. He sat up, disoriented and nauseous, and looked around anxiously to gain his bearings. “Belle! Belle, answer me.” Nothing. No answer or even the faintest noise responded to his pleas. Darkness enveloped him like a thick, suffocating blanket; breathing was difficult as he gasped for air among the sick smells assaulting his senses. The now all-too-familiar feeling of panic rose in him once again as his thoughts returned to his little sister and the strange ships in the sky, haunting him. Feelings of fear and panic alternated within him, like being hot and cold when he had a fever. His eyes adjusted somewhat to the darkness, and he made out small details around him. Using his hands, he combed the walls for clues or any useful information.

His first instincts brought to mind visions of cold, clammy, dark caves. The walls were wet and uneven, and appeared to be made of rock. He plodded his way around the perimeter, taking small steps, looking for signs of an opening or exit. He marked his starting point by placing a foot-long rock on the ground, close to the wall, so he would run into it and know when he had made it all the way around. When he encountered the rock again, the only additional information he had gained was that the structure was somewhat oval in shape and made of some type of rock, as he had envisioned earlier.

After two more times around the space, he thought he felt cracks along the wall that could possibly be where the door was located. He placed two more rocks at that juncture, identifying that space as well. A chill came over him from the cool dampness of his surroundings, and he thrust his hands in his pockets to stay warm. He found his pocketknife, flint and compass there, and he felt comforted but knew these wouldn’t help him just now but later…maybe later. With every slight movement, his braces clanked noisily, reminding him of their presence. That in conjunction with the fact that he could not connect with Arista or Whisterly, made him question if he were actually on Remeon. All he could do was remain where he was and hope he didn’t starve while he waited for his captors to make themselves known.

Time passed slowly as he thought back on all that had happened in just a few short months. Reflections from his stream of consciousness flowed unabated. Utmost in his mind were the precariousness of his current situation and wondering where Belle was. But also everything else that had happened to him recently which played a part in landing him right here. He had wished for this, all of this. He had wanted adventure; he had wanted distance from his family— mainly his pa. He had wanted to grow up on his own terms and had plans to make that happen.

Next, thinking back on his unexpected illness and the toll on his family, Thomas clearly saw in his parents’ eyes, when he woke in the hospital, how much they loved and cared for him. But amid the adventure and danger found on Remeon, he had felt needed in ways he had never experienced on the farm. Could he really save another race? And would he sacrifice himself to do so?

I've been writing in one form or another since I was a teenager. My love of the Fantasy genre goes all the way back to elementary school when I read The Hobbit for the first time - I've been hooked ever since. I currently live in Florida with my family, but love the state of Virginia where I was born. My works include poetry, short stories, and book two in my YA Fantasy series, Realms of Chaos, is now in process.

You can visit my website at www.jwgarrett.com to subscribe to my newsletter and find out the latest updates regarding new releases and works in progress.