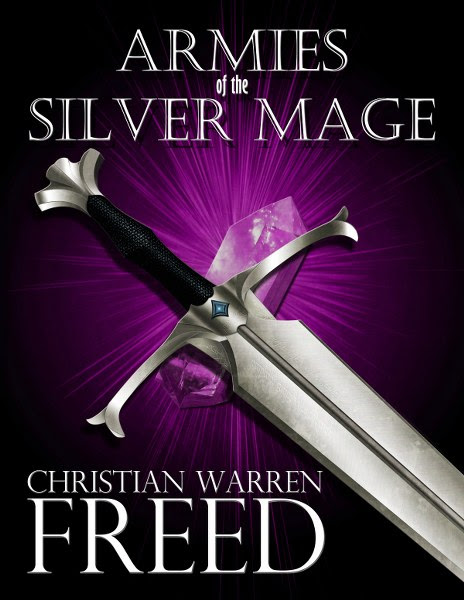 Malweir was once governed by the order of Mages, bringers of peace and light. Centuries past and the lands prospered. But all was not well. Unknown to most, one mage desired power above all else. He turned his will to the banished Dark Gods and brought war to the free lands. Only a handful of mages survived the betrayal and the Silver Mage was left free to twist the darker races to his bidding. The only thing he needs to complete his plan and rule the world forever are the four shards of the crystal of Tol Shere.

Having spent most of their lives dreaming about leaving their sleepy village and travelling the world, Delin Kerny and Fennic Attleford never thought that one day they would be forced to flee their town in order to save their lives. Everything changes when they discover the fabled Star Silver sword and learn that there are some who want the weapon for themselves. Hunted by a ruthless mercenary, the boys run from Fel Darrins and are forced into the adventure they only dreamed about.

Ever ashamed of the horrors his kind let loose on the world the last mage, Dakeb, lives his life in shadows. The only thing keeping him alive is his quest to stop the Silver Mage from reassembling the crystal. His chance finally comes through the hearts and wills of Delin and Fennic. Dakeb bestows upon them the crystal shard, entrusting them with the one thing capable of restoring peace to Malweir.


I write military fantasy and science fiction. I use my 3 combat tours of duty in Iraq and Afghanistan, a 20+ year career in the active duty Army, and a Masters of Arts in military history to provide readers with what I believe is a fairly accurate depiction of what war is like. Funny, I actually received a negative review from a reader claiming the action was too realistic. Wait…that’s what I was going for.

Sure, it happens on different worlds with weird species, but don’t we want a little touch of truth? I remember seeing The Two Towers for the first time when I was in Afghanistan in 2002. A fan of the Lord of the Rings from a young age, I was amazed and disappointed with what Peter Jackson churned out. Of course, the pirated copy we got our hands on somehow managed to gets most of the scenes out of order- explain that one to me…- but Jackson clearly had no understanding of tactics and strategy. The amount of lives lost during the siege of Helm’s Deep was appalling to me. It could have been me being in war or the fact that I led troops in combat. Regardless, I decided then and there to never let that slip into my writing. I may not produce the best books ever, but I do my best to make them engage, entertaining, and to leave the reader sitting back in their chair and saying…damn.

Christian W. Freed was born in Buffalo, N.Y. more years ago than he would like to remember. After spending more than 20 years in the active duty US Army he has turned his talents to writing. Since retiring, he has gone on to publish 17 military fantasy and science fiction novels, as well as his memoirs from his time in Iraq and Afghanistan. His first published book (Hammers in the Wind) has been the #1 free book on Kindle 4 times and he holds a fancy certificate from the L Ron Hubbard Writers of the Future Contest.

Passionate about history, he combines his knowledge of the past with modern military tactics to create an engaging, quasi-realistic world for the readers. He graduated from Campbell University with a degree in history and is pursuing a Masters of Arts degree in Military History from Norwich University. He currently lives outside of Raleigh, N.C. and devotes his time to writing, his family, and their two Bernese Mountain Dogs. If you drive by you might just find him on the porch with a cigar in one hand and a pen in the other.