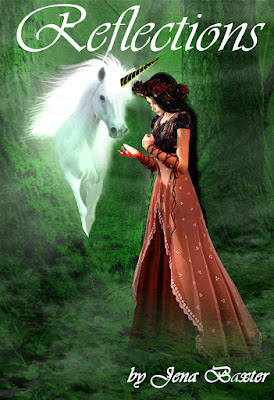 The guest post I sent out a few days ago was based on the Victorian Era. The Carriage takes place in that time period. Reflections takes place in the Regency Era, and moves forward from there. There were some differences in actions and style.

When we read about the Georgian and Victorian era, we always hear about tight bone corsets. Sometimes they were worn so tight that internal organs were forced to move aside. But in the Regency era, women escaped that fate. Corsets were made to enhance a lady’s natural curves, rather than making them smaller.  Like the modern day bra, the corsets of the Regency era were made to lift the bust, creating a shelf that highlighted the breast.

Muslin and silk were common fabrics, and dresses were embroidered intricately by hand. They flowed to the floor, draping like the robes of ancient Rome. Still, they wore a petticoat, chemisette, and long stockings held by garter belts for modesty.

While Juliette was not royal, her father was a man of wealth. As such, she would have been required to be a slave to the fashion of the age, wearing a more modest dress by day, and an elegant gown for social gatherings and parties at night.

To see and read more about Regency era fashion, check out my Reflections board on Pinterest.


Cursed to live in a world behind a mirror, Juliette learns the skills of survival from a unicorn, blood-thirsty beran, and a cantankerous, but beautiful, centaur, while being forced to watch her family and friends grow old without her.