Character Madness Monday is Back


from The Followers of Torments, series,

It's been a while since the last character interview. This will be the first of five character interviews from this series. Be prepared for a treat. Nameless speech pattern is strange to follow at first, but he has become a much loved character by many, and it becomes easier to follow after settling into the differences.

As am now, everything perfectly wrong.  Her life my care. Her honor my hands hold.

Purpose other than Her is what?

Where She is, home am.

Arena where Silk is.  Where Her honor increase can.

What is fur?  ::Reaches up to scratch his matted dreadlocks::  What is mat?

What is scary?  Apart from Her scary is.  Alone scary is.  Her Calling to Child be, scary is.  Person dead only.

Nice she.  Keep Her happy.

No.  Wrong everything was.  Lived I, ate I, survived I.  Free now, win I.  Strange ways find, nice is always be author me to.

Know not.  Listens always does, sleep know not if. 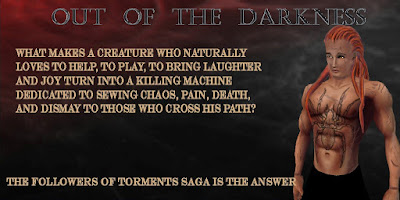 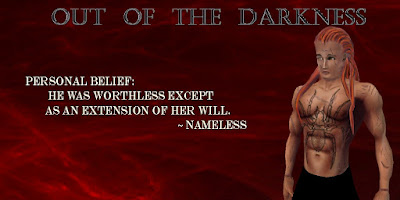 Summay for Out of the Darkness - Followers of Torment's Book 1

He is called Nameless. Born to fight in the Arena, he has won his way to freedom. In a bloody world where cunning and strength count for all, and personal gain is everything, he finds that freedom is even more chaotic than slavery. Bound to honor oaths both to Goddess and self, he must fight a war against the culture that spawned him to strike his own path.

Born in Houston, K. Caffee has a long history of spinning captivating tales for a wide range of interested people.  One of her earliest memories is being lost in a huddle of adults as a kindergartener on her way to a church choir camp.  Whatever she tale she had been telling was captivating enough the entire group missed a rest stop, and the bus driver proved to be very patient when the 20 or so adults all requested an emergency stop about an hour after the scheduled one.
After several years of running various role play campaigns, K. Caffee thought her story telling days were done.  She entered the work force, then school, but the stories were not done with her.  The Followers of Torments saga ambushed her in 2014 with the ultimatum “write.. or don’t sleep.”  As you can tell, despite a valiant effort to focus solely on school, K. Caffee lost the fight.  And, now, despite still carrying an overloaded graduate schedule, she continues to write and more of the pukah who gave her the ultimatum in the first place are lining up at the mental doors demanding to be let in.
What free time she can pry out of the hands of her story and her school work she devotes to her two furry, feline owners, human family, and discovering new friends on Facebook, Twitter, or keeping up with documenting the various non-story thoughts she gets on her blog.