Character Madness Monday - Interview 2 of 5 The Followers of Torments

There are two stories with me.  The first is how I came to be, though I have not yet attempted to chronicle that one.  The second is much later, after I had learned the rudiments of what I needed to know.  I convinced my progenitor to “lose” me in a wager to the fighter I saw so long ago in the Sands.  There is something about him… something I can not yet grasp… that is important to myself, and my House.  Only in service to him will I be able to come to understand what that something is, or to bring my rogue gifts under control.

I am a guide for Nameless, though I must tread carefully.  He is my master, and yet I must ensure he reaches the end I have foreseen.   I am also his Silk’s trainer.  All new captives are turned over to me for their training in preparation for the Sands.  He helps, but as a Runner, there are many things he must do which limit the time he can spend training his stable.  I am his right hand, and yet I am nothing.

In a way, it is a little of both.  Do not get me wrong, Nameless has no idea what love is, or what it entails.  Yet, he loves Voras with his entire being, which is what makes it a scary tale.  I fear what will happen to him – both what he does to himself, and what She may do to him along the way.  He has so much to learn, and to do so, he must be divorced from the Web Mother, or else She will prevent him from learning it.

I’ve heard some of the best gossip!  Our chronicler has started talking to each of us, separate from Nameless, and is attempting to chronicle our lives as well.  It is going to be such an interesting time, learning if my gifts have given me accurate information.

It is also said our chronicler has the ability to see deep into our past.  That is one area I have never been able to explore.  My progenitor compelled me to never do so, and yet there is something back there that is important.  I know it!

The head of my House.

The current prince is an incompetent fool who thinks he is the Tormenter’s gift to the world, and that he is the direct heir of Innu.  Even I can see he is not.  For starters, he is of mixed heritage, and Innu never had children.  We are a House in decline because of his foolish stewardship, and that must stop.  I will not let the idiot ruin us.

Hmm.  That I do not know.  I have grown fond of the Melkreschen Realm.  Such wonderful flavors there, and a never ending feast.  Yet, the House’s established territory has features that make it desirable as well.  Perhaps, during the lunars when the sun is strongest I would remain in the Melkreschen Realm, then when the sun’s power weakens, in our ancestral home.

Wherever master is, is where you’ll find me.  I never know where he’ll take us to next.  Though, it appears I’ll not be seeing either of my preferred environments anytime soon.  Master has some odd ideas, and insists on trying to bring them about.

I think so, but do not know for certain.  ::Flashes her fangs in a grin::  Though, if Innu arrived and asked me to be his bride, I would not say “no”.

I was left alone, considered by everyone to be too insane to remain nearby.  Before I was embraced, I had been driven out of my village and abandoned by my protector.  There is only myself to consider now.  And Master.  I cannot forget to consider Master.

Dear friend, if I have fur, then someone has cursed me and I would like to know who.  Though, I will admit that there are times I do not like my hair, matted as it is.  The rest of the time, I could care less.  It is as it is, and I have other things to keep my mind occupied.

I would have to say Master.  Not for his fighting prowess, but because of what he could do if he makes the wrong choices.  There is something about him that I can see, but I have yet to be able to say.  It frightens me, because I fear my Gifts are awakening like my progenitor’s did – always for others, never for myself, and yet somehow I must know what to expect if I am to help him make the right choices that preserve the largest number of lives.

To be honest, I think it is that scamp Raonal.  He may not like the collar, but he has a way about him that makes everything he does a game, and almost everyone he comes across laugh.  Even when he was faced with a first-blood fight, he still managed to make it funny.

Smart, headstrong, and everything you would want for a scribe.  She occasionally tries to guess the tale we have to tell, but after a bit of a tug-of-war with the story, she remembers she’s just the scribe and we’re the story tellers.

Very well.  Though, perhaps I am not as unbalanced as she portrays me.  Perhaps I am? 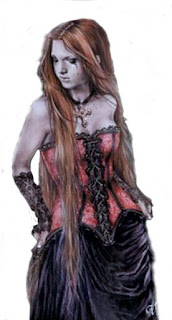