STAR WARS GALAXY'S EDGE: A CRASH OF FATE by Zoraida Córdova ***Spotlight -- An Interview with Zoraida Córdova; Find out her most difficult scene to write -- Giveaway***

A CRASH OF FATE 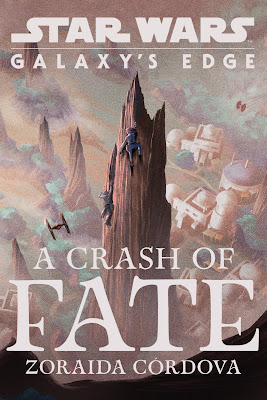 Izzy and Jules were best friends until Izzy's family abruptly left Batuu when she was six. But now she's back, and Jules, the boy who never left, is unsure what to make of her. While on the run from vengeful smugglers and an angry pirate, Jules and Izzy will come to terms with who they are, and what they mean to each other.


Welcome to Character Madness and Musings.

Tell us about your newest book.

Star Wars: A Crash of Fate is the story of two unlikely friends. Izzy is an aspiring smuggler and Jules is a starry-eyed farm boy. They have 24 hours to deliver a package or die trying. (And also fall in love along the way.) It’s set on the world of Batuu which is the setting of the Galaxy’s Edge theme park. The First Order is on Black Spire Outpost and the Resistance is somewhere on the planet. Jules and Izzy navigate the dangers and feelings for each other. It’s about family and finding the place and people you belong with. The thing about Star Wars is that there’s always some sort of war happening, so the questions I wanted to ask is: why would these two people choose each other even when the odds are not on their side?


Writing isn’t easy. What was the most difficult thing you dealt with when writing your book?
Focus. I have multiple deadlines and sometimes it’s hard to focus. Writing isn’t just putting the words on the page. It’s thinking about story. Figuring out what your characters sound like. Knowing the ins and outs of your world. That stuff doesn’t always come when you’re sitting at your computer.


Tell us about your writing career.

I started writing when I was thirteen. At 16 I went to the National Book Foundation Writing Camp. Most kids got to go to summer camps with water sports and picnics and whatever The Parent Trap and Addams Family Values taught me about how summer camps work. But this was even better because it was 10 days of workshops from professional writers like Jacqueline Woodson and Cornelius Eady. Being a teen around mostly adults who were already trying to break into the industry was a driving force for me. I know I could do it and I started writing feverishly, even if the stories weren’t good yet. I was 16 and had a lot to learn. But I think that writing camp really changed the way I approached writing and say it as a possible career.

I published my first novel in 2012. The Vicious Deep about a boy who discovers he’s mermaid royalty set in Brooklyn. I wrote some romance, then the Brooklyn Brujas series. (I’m from Queens, New York but Brooklyn just has a great magical vibe.) I have a pen name Zoey Castile and write steamier romances there. It’s been a long ride, not always smooth, but I’ve made it work. I’m very fortunate to do what I love.


What was your most difficult scene to write?

The hardest scene for me is always the moment when everything goes wrong. I’m inclined to just write happy scenes straight through but stories need conflict and darkness for our heroes to earn their happily ever afters! I like drama in my fiction.


Are themes a big part of your stories, or not so much?

All fiction has a theme. For A Crash of Fate it is the search of family and home.


What are you working on now?

I’m working on Incendiary, a high fantasy about a memory thief working to bring down a corrupt king. The world is loosely inspired by medieval Spain. That comes out April 2020. I also have a YA anthology which I’m co-editing with one of my best friends, Natalie C. Parker. It’s called Vampires Never Get Old and it features 10 stories from authors like Julie Murphy, Victoria Schwab, Dhonielle Clayton and more.


Who is your favorite character from your own stories, and why?

I really love Jules Rakab. He’s just so earnest and sweet. He’s definitely got room for a dark side, but he chooses to have hope and see the best in people. He also loves his home planet of Batuu.


Most writers were readers as children. What was your favorite book in grade school?

I didn’t like to read until I was in Junior High. Then my favorite book was In the Forests of the Night by Amelia Atwater-Rhodes


Is there anything you would like to add before we finish?
I hope they take away from A Crash of Fate is the idea that everyone is a little lost sometimes, but that doesn’t mean that there isn’t hope that things will get better. You never know when you’re going to find your way home.


That's so true and such a positive message. Good luck with your newest release, and thank you for being with us today.

Enjoy and welcome to Batuu! 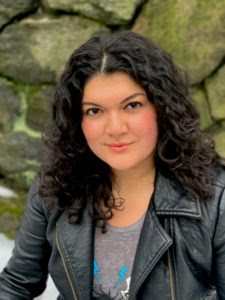 
Zoraida Córdova is the award-winning author of the Brooklyn Brujas series and The Vicious Deep trilogy. Her short fiction has appeared in the New York Times bestselling anthology Star Wars: From a Certain Point of View, and Toil & Trouble: 15 Tales of Women and Witchcraft. She is the co-editor of Vampires Never Get Old, a YA anthology forthcoming from Imprint/Macmillan in fall 2020. Her upcoming YA novels include Star Wars: A Crash of Fate (Disney/LucasFilm 2019) and Incendiary, book 1 in the Hollow Crown duology (Disney/Hyperion 2020). Zoraida was born in Ecuador and raised in Queens, New York. When she isn’t working on her next novel, she’s planning her next adventure.

3 winners will receive a finished copy of STAR WARS GALAXY'S EDGE: A CRASH OF FATE, US Only.