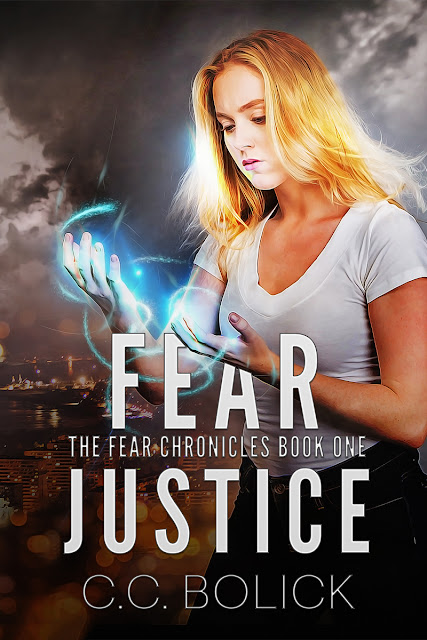 Seventeen-year-old Rena Mason counts the days until she can leave for college. Every night her father drinks himself to sleep, leaving her to care for her younger brother. When her father is kidnapped by terrorists, her dreams of freedom become a nightmare.

Stunned that her father has a history with these terrorists, Rena knows she must run or be their next victim. She learns the tough guy at school has a reason to look after her - he's working for a government agency with the same goal as the terrorists: find a woman who disappeared eighteen years ago. Time is running out since only this woman's special gift can save the world from a looming nuclear attack.

Rena can't trust anyone, especially not the stone-cold agent she's falling for. Can they save the world before Rena's feelings trap her in an agent's fight for justice?

Fear Justice contains elements of fantasy, sci-fi, and paranormal, with a clean romance. It's the first book in an exciting new series called The Fear Chronicles.

He smiled and held out a hand. “I’m Tony and no, I’ve never thought of myself as a nice guy.”

Staring at his outstretched hand, I hesitated. “Rena.”


Tony moved his hand closer and his eyes took on a look of intensity, as if daring me to shake his hand.

“What’s with the gloves?” I asked.

“Skin allergies. What’s with the hesitation?”

“Hesitation?” With defiance, I reached forward. “I’m not afraid of you.”

“What are you afraid of?”

As his hand gripped mine, my breathing sped and I fought to control my voice. Our skin wasn’t even touching. Hiding my feelings with Robbie had been easy, but this was… weird. “Why are you worried about who I date? You don’t even know me.”

“I know your name is Rena Mason. We’ve got physics together.”

A twinge of guilt caught me off-guard. “I haven’t noticed you before.”

“My dad taught me to blend in with my surroundings, like camouflage.”

“Not exactly, but he did teach me how to shoot before he left.”

“Left?” The instant his words were out, I felt a connection to him. It was a sadness that welled from deep inside, the knowledge that we were alike in a terrible way.

C.C. Bolick grew up in south Alabama, where she’s happy to still reside. She’s an engineer by day and a writer by night—too bad she could never do one without the other.

Camping, fishing… she loves the outdoors and the warm Alabama weather. For years she thought up stories to write and finally started putting them on paper back in 2006. If you hear her talking with no one to answer, don’t think she’s crazy. Since talking through her stories works best, a library is her worst place to write… even though it’s her favorite!

C.C. loves to mix sci-fi and paranormal—throw in a little romance and adventure and you’ve got her kind of story. She’s written nine books including the Leftover Girl series, The Agency series, and The Fear Chronicles.

One randomly chosen winner via rafflecopter will win a $50 Amazon/BN.com gift card.