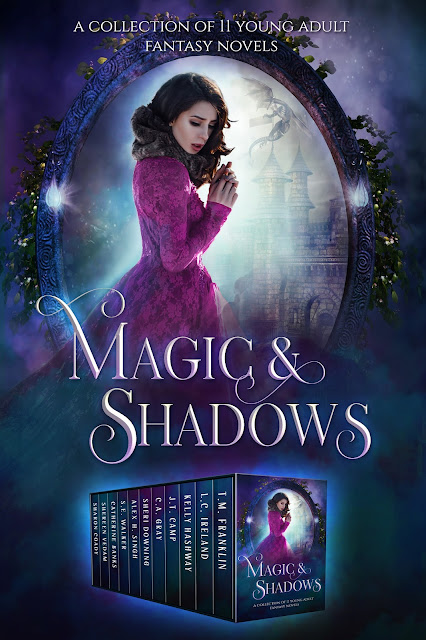 
Magic lurks in every shadow.

Slip into darkness with 11 action-packed YA fantasy and paranormal novels. This collection has something for every lover of the mystical and mysterious—from dragons, demons, witches and vampires, to shifters, mages, and magically evolved humans—even gods from Norse and Greek mythology.

If you love romance and adventure with a supernatural twist, don’t miss this otherworldly collection from ELEVEN bestselling and debut young adult authors—only available for a LIMITED TIME.

A look at what’s inside…
More by T.M. Franklin
Haunted by terrifying nightmares and certain she’s being watched, college student Ava Michaels finds an unlikely ally in physics tutor Caleb Foster. But Caleb isn’t quite what he seems. In fact, he's not entirely human, and he's not the only one.

Together, the duo faces a threat from an ancient race bent on Ava’s capture, and possible extinction. As Ava fights to survive, she learns the world’s not what she thought.

It's a little bit more.

Delta’s family has been cursed. To save them, she makes a deal with the Horrid Witch. If she wishes to break the curse, she must kill an innocent woman. Delta will have to choose between saving her life ... and saving her soul.

Fading into the Shadows by Kelly Hashway

Ella Andrews and her best friend, Avery, travel to the world of Stellaris, where they wind up in a battle against the mythological creatures Draco, Serpens, and Scorpius. They’ll have to stop the rogue constellations before Stellaris drains the life out of them and turns them into shadows forever.

Art of Deception by JT Camp
Fallon has one more chance to prove she belongs in Hallowridge. Warren, Grainger, and Abraham are there to make sure she doesn’t. However, when plans go sideways, can Fallon step up to the plate, or will she continue to run?

The Liberty Box by C.A. Gray

The United States is now The Republic of the Americas, and the people are controlled by brainwave technology forcing them to believe that they are prosperous when in reality they are starving. A few rebels know the truth. But can they help to set the others free without losing their own lives in the process?


The Protected Prophecy by Sheri Downing
“We lived the illusion that we were safe. Maybe we beat this thing and could survive, rebuild.”

There was a bigger message behind the scourge that affected any living thing. I’m part of an ancient prophecy that involves the oldest battle to ever exist. Good versus evil.

A Queen on the run for her life….

A Stepdaughter with no mercy….

The Murder of the King of Tibethia…

Only the light will prove her innocence...

Following a lead in a family heirloom, Ariel arrives at 101 Borden Street looking for answers. When her ex-boyfriend shows up, she must rely on friends from both sides of the veil to overcome her past and discover the truth of her family history.


Alys of Asgard by Catherine Banks

Alys knows her presence is throwing the balance in Asgard off-kilter. She moves to Earth, but the transition is not smooth. Soon she realizes her adopted father lied to her, and with all she thought she knew stripped away, it's time to uncover the truth about who she really is.

For two long decades, TAMARA was caught up in a time spell. Awake, aware, not aging, but thoroughly silenced. Once released, she rejects any form of confinement, determined to maintain her freedom at all costs. Now a devious enemy is quietly working to ensure Tamara remains silenced forever.

Seventeen-year-old Elizabeth believes in magic. A book about vampires intrigues her into researching the stories. When a stranger contacts her about her haunting dreams she’s thrown into a world where vampires and magic exist along with an all out war against humans.


Get it for a LIMITED TIME
Amazon | Nook | iBooks | Kobo


Excerpt from Art of Deception by JT Camp

“Do we enjoy good girls?” Abraham quipped, pulling him from his musings.

He stepped away from the guys. Between the three of them, they worked the best together. Adding Fallon to their group would tear them apart. She had no sense of morals. No sense of self. She didn’t even respect her family.

“You like her?” Abraham lifted his chin in the direction of the glass separating the rooms.

“No.” He shook his head, opening the file in his hand. “She’s trouble.”

“She seems like she enjoys life. Has fun.” Warren shrugged.

“Fun?” He gazed at the stocky lesser demon. Warren’s hazel-green eyes glowed with a hint of mischief. “Not at all.”

“He likes her.” He chuckled, catching Abraham’s eye.

“Yep. This should be fun.” The vampire joined his demon boyfriend in a quick laugh.

He shook his head. “She’s been in trouble the whole time she’s been here. Egging the Carmine house. Toilet papering the park trees for Samhain. She scribbled a horrible message under Mr. Hitchenson’s classroom window.”

“And?” Warren cocked a brow.

He blew out a breath and slammed the file closed. “Both of you are enforcers. You should be worried about her activity escalating.”


Excerpt from More by T.M. Franklin

Ava pressed back against the tree trunk, trying to hold her breath but only able to manage it for a moment or two before her lungs gave out, air sawing out and in again desperately against her will. Rough bark rubbed the skin of her palms where she gripped the tree, scraped her cheek as she turned her head to try and catch a glimpse of him.

Nothing to see. No one to help.

She eyed the entrance to her dorm frantically, the lit doorway calling out like a beacon on the other side of the concrete bridge.

If she could only get behind that door—lock it fast—she would be safe.

The word echoed through her panicked brain, foreign and twisted.

Could she ever really be safe while he was out there?

“Do it,” she muttered, inhaling sharply as tension rippled through her. “Just go.”

With a shove at the tree, she ran for the bridge, heels clacking loudly on the path as her muscles screamed. She glanced over her shoulder, catching a flicker of movement through the trees.

Ava willed her legs to move faster, arms pumping in desperation—reaching out and pulling at the air, as if she could yank herself forward.

Her breath caught. She could hear him. Footsteps chasing after her.

No—footsteps beside her—now ahead of her.

The better question seemed to be, where wasn’t he?

He surrounded her—harsh breaths and pounding feet—a low, mocking laugh as she leapt from the bridge back onto the path.

Only a few more feet to the door.

She reached out, aching to wrap her fingers around the gleaming brass doorknob.

Then with a blur of movement and a gust of a swirling air, he stood in front of her, blocking the way. Huge, hulking, and shadowed by the darkness, he laughed as she recoiled in fear, falling backward in her haste.

“Did you really think you could escape?” he hissed, reaching toward her.

Fingers ripped the icy ground as she rolled over, trying to crawl away, rocks digging into her knees and her palms, a bit of glass slicing neatly into the meat of her thumb. She winced, lifting it to her mouth to suck the blood, feet kicking back as he grabbed her ankle.

He laughed again, jerking her back with one strong pull and dragging her effortlessly across the ground. He bent down, wrapping a meaty fist around her neck, and she clawed it desperately, unable to breathe.

Lifting Ava off her feet, he glared at her, a flash of light catching his angry, mismatched eyes—one blue, one green.

For a moment, she was almost mesmerized.

Then his lips curled in derision and he squeezed, cutting off the scream curdling in her throat.