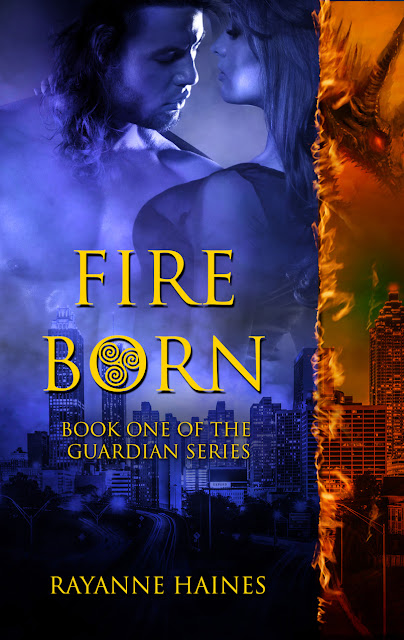 
When Alex Taleisin’s immortal DNA kicks in after a fight for her life against something not-quite-human in the YMCA parking lot, her Aunt finally lets her in on the family secret. They’re Immortal – Elementals to be precise. Only, Alex is a little something more, and until they discover what, her life is in danger.

Collum Thronus, Guardian of the Races and savage King of the Dragons has no choice but to protect Alex and find her father’s people. He made a promise and Collum always keeps his promises. Now, he needs to keep his hands of his charge.

Enter an insane grandfather, a shifter with a hidden agenda, and a witch with a shoe addiction and soon Alex is wishing for a quiet house in the hills with the dragon she’s falling for. But a battle is coming and Alex knows the only way to find her answers is to trust her powers and become the warrior she was destined to be.

Alex refused to break eye contact. Something inside clawed at her flesh—reaching for the man in front of her. Her knees buckled as he pressed his face to her neck. She held his shoulders as he lifted her, sat her on the kitchen counter, and stepped between her thighs. The whole time he kept breathing in like he was trying to absorb her. His hands were brands on her skin. One palm stroked her back, the other found its way into her hair.

She pressed her body against his, trying to take on his heat. Her breasts crushed against his chest, and she whimpered in the back of her throat. Things like this didn't happen to her. She usually dated journalists with very un-dragon like qualities or weekend mountain men with annoyingly trendy facial hair. She did not get ravished by drop dead, slam-dunk, gorgeous alpha males, in her aunt’s kitchen.

After this morning’s revelations, she was ready for a bit of sinning. She nipped at his neck. His grip tightened as he growled low and deep. Somewhere in the back of her mind, Alex realized she was ready to have sex with a stranger on her aunt’s kitchen counter, with said aunt in the other room, perhaps even on her way back to this room. Awareness crashed in with a resounding thud.

He stepped back and shoved his hands through his hair in jerky movements before drawing a ragged breath. “I’m sorry. That shouldn't have happened. You’re at a critical point in your transition, and that makes your heat difficult to ignore . . . It will likely get worse as it grows.” His jaw clenched. “I should have been more prepared.”

Alex blinked, her mind jumped from one thought to the next.

“Did your aunt tell you what’s happening?”

“What?” She shook her head. “What the hell? Aunt Quinn!” she yelled, jumping off the counter to back away. Pulling her housecoat tighter around her neck, she snapped, “Are you kidding me? You can't do that. And I’m not sending out heat, asshole!”

He held up his palms in surrender. “I said I'm sorry. We don't have time for this. There are people who will hurt you if they know you’re still alive. I need to get you somewhere safe.”

A panic attack pushed at the edge of her temple. Confused and turned on, she needed a goddamn coffee. She refused to give control of the situation to him. “So, you're some kind of dragon thing? And I'm supposed to go away with you?”

Collum sighed and gritted his teeth. “Yes, something like that. Your enemies will make a move soon. As soon as they find out you live, they'll come after you, and me for my part in it. We hoped your element wouldn’t surface.”

“I'm expected to believe everything Aunt Quinn said was real. Just like that?”

“Yep.” He blew more smoke at her mouth, his gaze intense. “Just like that.”

She stumbled back. “Wait, do you know who my father was?”

“I don’t. But now that you’re transitioning, we need to find out before the elders do. They tend to dislike things more powerful than them. And if I’ve guessed right, you kid, are about to be far more powerful.”

He pulled at a stray thread on her housecoat, right above an old coffee stain. “You need to put some clothes on.” Collum reached for her hand. “We have to go now.”

Alex yanked her hand back. She knew if she let him touch her they'd be on the floor. She didn't know if she trusted him, but she'd learned over time to trust herself. Aunt Quinn hadn't told her enough, but it was enough to know she wanted to find out more. Now she had to figure out why her parents were killed. If sex dragon guy could keep her alive long enough to do that, then she'd go with him. She took a steadying breath. She didn’t usually feel small around men, but this giant dwarfed her. Instead of being frightened, she wished he’d lean down and cover her mouth with his. He grinned like he knew what she was thinking, took her hand in his larger one, and

rested his other on her hip. Alex almost purred with the echo of his heat. She reached to touch the smoke pouring out the strands of his hair. Quinn walked in before she had a chance.

Alex wished she could sink into the blue wall paper, but he simply raised his head and

took one step back. He gave his head a slight nod. “Quinn, I presume.”

She responded the same. “Dragon King.”

“You have her things ready to go?”

All business, she handed the bag to him. “Everything is here; passport, extra clothing, all

“Good. We won't have time to stop. I won't make contact again for a few days, but I

assure you I’ll let nothing happen to her. I promised Kaylen, and I never break a vow.”

Alex interrupted them. “Um, hello. I'm right here you know. How about you both talk to me, instead of over me? Besides, I haven't agreed to go anywhere yet.”

Collum stiffened, and glared at her.

She stomped her foot. “I’m not a child. I’ll make my own decisions, thank you very much.”

He snorted and turned back to Quinn. “Say your goodbyes. I'll be in the car.”

He strolled out of the kitchen like it was any other day of the week—not like her life had been ripped to pieces.

Quinn dropped the bags at her feet and rushed toward her. “I told you he was impatient. You really have no choice, my darling. I swear on my life that we’re telling you the truth. This must happen. You’ll be safe—he can control your fire.”

Quinn handed her a yellow tank top and a pair of sweats. “Now put these on. You can't run for freedom in a Hudson's Bay housecoat. It's undignified.”

Alex held on to her aunt as tight as she could for a final minute, then stepped away. “I love you too, Quinn.”

Five minutes later they walked out to Collum's vehicle. After a final kiss to her aunt, Alex climbed in the vehicle and looked at her would be savior. “Okay, Dragon Boy. Let's go find out who Daddy is.” 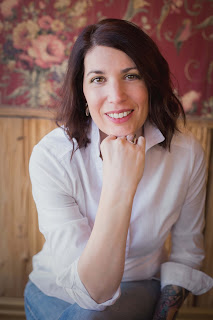 She writes Paranormal Romance with Kick-Ass Heroines. She believes in magic and legend and all the things we cannot see. Rayanne prefers her alpha males a little gritty and the women who love them, in charge of their own destiny.

Fire Born is the first book of the Guardian Series published by Soul Mate Publishing. Magic Born is available June 2018. 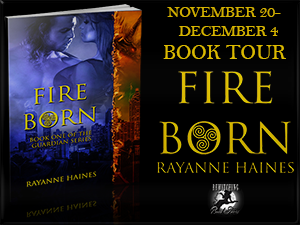