A Review of A Wild & Unremarkable Thing, by Author, Jen Castleberry

Now, with hair shorn and breast bound, Cayda marches into the Summer Alps as Cody, a hopeful Champion seeking a dragon-slayer’s reward, with the full weight of her family’s survival on her shoulders.

But the road between poverty and prosperity is rife with beasts, betrayals, and baser temptations. Sensible Cayda soon discovers that she is not the only Champion with her eye on the prize, or the only one wearing a disguise.

With monsters, gods, and royalty hot on her heels, Cayda must ask herself if victory is worth sacrificing her identity for – or her life.

A Wild and Unremarkable Thing pits girl against dragon in a stunning blend of Greek mythology and medieval lore. Readers will not quickly forget the diverse cast or the thrilling, sexy ride! 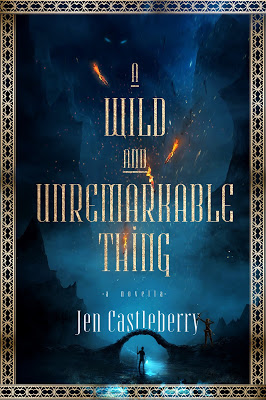 A Wild & Unremarkable Thing is a crazy ride. The prose is slightly poetic in style, reminiscent of Terry Pratchett I'd say, but while that style tends to be good for some people, it isn't really for everyone. I say that while biting my lip, because one of my closest friends LOVES Pratchett and his style of writing. Having said that, the prose rambles on about unimportant things at times, but I found that forgivable about twenty percent into the story, where the male main character enters the picture, and the story takes off.

While this book is YA, there is some foul language and sex. While the sex isn't in your face, there were some moments some might deem inappropriate for teens.

I loved Ms. Castleberry's characters, Xerxes God of Death, Cody, a young woman raised to be a man, her sisters, and the kingdom's Prince, as well as others. I found each of them unique and fun. Cody is smart and strong, and she and her sisters deal with abuse, and unfair situations at times. Life is like that. I would have liked to see more of the sisters, considering our heroine's sacrifices for them. I would also like to have seen the ending in more detail. The set-up for the next book is a little invasive, since the goal of announcing another book is obvious, but I'm glad the story will continue on.

The storyline is tight, but a little bit predictable at times. I still loved it, and the bit of anguish before the ending.

Jen Castleberry resides in Virginia Beach with her husband and pets. Her background is in Communications and Animal Welfare. All of her pets are named after superheroes!