"Sometimes, life and love can follow the most obscure paths, just as they did for Elisa."

Her life becomes a dark, cold, lonely cage the day the devil takes her as his wife. He robs her of almost everything she holds dear: her health, her wealth and what is left of her family.

Trapped between the nuances of life and beyond-life, Elisa finds herself struggling for a better tomorrow. With her health deteriorating, how will she summon the courage and strength to stand her ground? And how far will she go in the pursuit of a dream?

Embark with Elisa on this puzzling Gothic adventure set in the late Victorian era, between the world of the Living and the picturesque, melancholic Duskland. 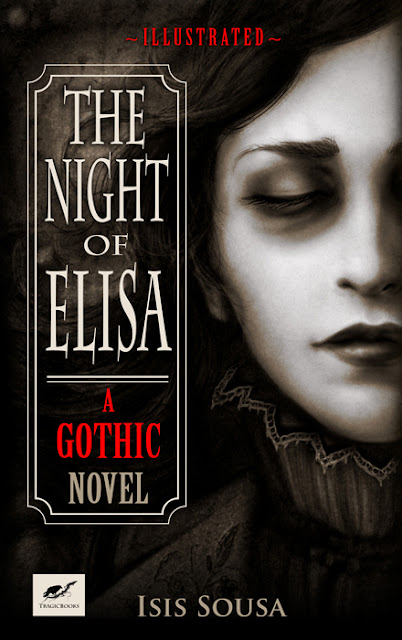 The Night of Elisa is first and furthermost Victorian Gothic, but can also fit within other genres such as Dark Fantasy, Paranormal, Mystery and Occult. 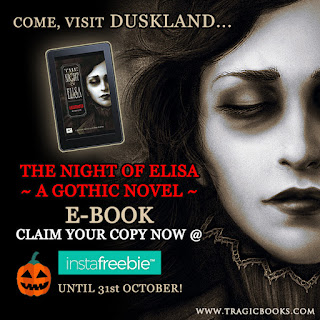 Get it Free at Instafreebie

‘Elisa’ woke up slowly on the crimson pillows of the adorned wooden couch. Her vision was blurry and her head was spinning. How is this possible? Her heavy eyes resisted her will to see the world, yet little by little the figure of a gentleman formed, sitting on a chair by her side. He was a tall, slender, slightly athletic type of man, well-dressed and, she could tell, of noble manners. He had pale skin, a sculpted nose and a wide forehead embraced by fiery curls.

“You are safe in my house.” His voice was calm, poised and sounded somehow familiar. There was a long pause. “I don’t know what happened to you, but hopefully we are going to find out...”

He looked at her intently. She was weak, slightly frightened and her countenance was as delicate as a white rose. Her hair had a mahogany nuance and was curled and tied back. She was dressed in a fine, dark violet dress and boots. Her grey eyes, as beautiful as the sea on a stormy day, were wide open and her voice was pleasant to the ear, like a mermaid’s song.

“I found you hurt in the woods last evening and brought you here. You’ve been mostly asleep since then. I’m glad you woke up.” A slight smile formed on his face as he devoured her neck with his eyes.

‘Elisa’ was reading the large room, looking at the faded colors of the wooden ceiling and walls. The fancy furniture, ornaments and expensive portraits were all covered with a thin layer of dust, but were otherwise in perfect order. The house was as old as everything inside. It had the smell of the past.

In a long moment of complete silence they could hear each other’s breath. Slowly and carefully she sat up in the middle of the couch, without deviating from the stranger’s grim, blue eyes. She looked up at the second floor and spotted a taller figure standing in the darkness. She thought he looked as obscure as a ghost. Who is that strange man watching us? She looked back at Leonhard, who was also staring at the figure.

“I’m Leonhard, madame. What is your name?” He turned his gaze back to the fragile and confused lady. When his eyes met hers he almost stopped breathing, as if he had seen the eyes of an angel.

The figure drew closer to the polished handrail. He was a thin man in his mid-fifties, with bits of grey hair and a pale countenance, dressed in a suit jacket. He looked down at her for a second, examining her, and then he walked away hurriedly like the devil escaping from the cross.

“That is Dr. Charles,” Leonhard said, interrupting the moment of silence. “He medicated you when I brought you home. He is... not much used to foreigners. We share this house since neither of us has a family. He will get used to you, I hope.”

‘Elisa’ gave Leonhard a weak smile. She was obviously uncomfortable and becoming more and more impatient. Where am I? What happened to me? Who are these people? I need to find a way to get out of here! She crossed her arms, twisted her lips and looked around the finely arranged living room, thinking a thousand things at once.

Leonhard could hear, feel that her heartbeat was accelerating. He was growing impatient, wondering what sorts of things were passing through her head. Many questions appeared in the corners of his mind too.

Just as he was about to speak, the young lady extended her silky hand to him. She was hesitant but gathered enough courage to look deep into his eyes.

Leonhard was hesitant. He was sure she needed more rest; after all she had been through since he found her it was hard to believe she felt well now. Dr. Charles, you are amazing! What kind of miraculous drug did you give to her? Leonhard wanted to protect and take care of her, hold her... He felt the urge to reach for her neck. Old habits die hard! Hold yourself, Leonhard! Concerned as he was, he thought some fresh air would indeed do her good, and it was better for him to go and watch out for her.

“Do you want something to eat first?”

“No! Sorry, sir! I have no appetite. Please...” There was a note of desperation in her voice.

“You need to drink some water. It’s important for your health. I will bring a glass for you and then I can show you my garden.”

“Thank you so much for your kindness!” Why do I have the impression that deep inside every kind man there is a fearsome demon? I need to keep calm or I will ruin everything.

Leonhard sensed she was afraid. Perhaps she might run, escape. But escape from what? Does she see me as a threat? He came back from the kitchen with a glass of fresh water.

Once she had finished drinking he put the glass on a nearby sideboard. He took her delicate hand gently under his left arm and they walked slowly, through the main doorway and out into the well-maintained garden. ‘Elisa’ was secretly grateful that the gentleman was helping her walk so she wouldn’t crumble.

The plants had been grown in geometric patterns. The bigger bushes were rounded and the smaller ones were cut flat on the top and sides, forming natural fences alongside the pathways. There were many different flowers, but all were shades of purple, white and crimson. A big fountain stood in the center of the garden and a couple of smaller ones aligned with it towards the garden’s edges. Each of the fountains was topped with a sculpture of a nude dancing angel. There was the smell of grass, flowers and afternoon, and the sunset was glooming on the horizon, as it mostly does in Duskland. 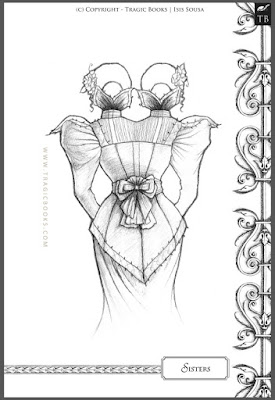 I am an artist, illustrator and graphic designer who writes on my free time. But with all the imagination I have running lose, there came some stories… And there came some books!

I am born and grown up in Brazil, however I live in Mid-Norway with my beloved husband, in a tiny valley surrounded by mountains and with very few neighbours.

When I’m not doing artwork and illustration for clients, I’m doing woodcarving, painting ornaments, painting artworks for myself, and so on. Love Arts, History, Heavy Metal and Dark things. 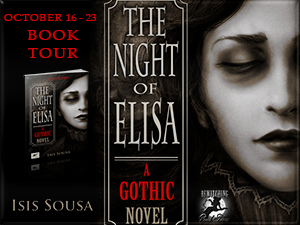