Fairy-tales ... from me?
After all, I mainly write medieval fantasy.
And where would I start?
At the beginning, I suppose.
But of course, didn’t we love to hear fairy-tales from our parents?

When I was small, my dad told me a different story every night, and every single one came from his own imagination. Looking back I realise how many were inspired by fairy-tales.

With the vivid imagination of a small boy, I had dreams of standing in front of the fire-breathing dragon and slaying it with one slash of my huge sword. Dad even made me a wooden one. And what about Jack and the Beanstalk? I loved it, but my mum was none too pleased when I cut down her giant sunflower.

Of course fairy-tales were told many, many, years before I emerged into the world. Take the classic story of Little Red Riding Hood as an example. This tale was originally dated back to the 17th century. But latest research has suggested that it could be over 2600 years old, because a similar tale has been found in China. The only differences being that the main protagonist was a small boy and the wolf was replaced with a tiger. Now that is amazing, for stories from that time, and for centuries afterwards, were never written down. Whilst subtle alterations have occurred and the tales have evolved over time, the basic story has endured.

Not long after my father read me that story I met a large Alsatian in our street. I took one look before running all the way home, screaming wolf at the top of my voice. When my mother introduced me to the neighbour’s new dog and he licked me to death, I realised the difference between fiction and truth. I think I slept better that night.
And I still smile at the memory.

One of the most prolific writers of his era was Hans Christian Andersen, yet he is more famous for his wonderful fairy-tales; my favourite being - The Ugly Duckling. What a great tale, and with a nice moral. You can be ugly but you can change, and become beautiful. I’ve always believed that the story should not be taken too literally, as I am sure that he perceived that beauty could be found on the inside as well as the outside.

So, what do we expect from our fairy-tales?

Like any other story we demand a beginning, middle, and an ending, preferably a happy one: anything to keep us interested all the way through. But we don’t always get what we want, do we?

And even then it’s not enough, is it?

We want a princess or three, evil villains, brave princes and dragons with long tales and sharp teeth. And we wish for, elves, imps, dwarves, orcs, and fairies; not forgetting bucketfuls of fairy-dust. For you can’t have a fairytale without fairy-dust, can you?

With all the characters leaping from the pages our fantasies soar like an eagle, and all boundaries disappear in a trice.

I wonder what would happen if we could bottle up the power of a child’s imagination. The mind boggles with the possibilities.

We love fairy-stories, and even though the tales get bigger in the telling, we pass them on to our children, and our grandchildren. We never worry about the effect on our young because we know that the tales never hurt us.

And as we see the magic in their eyes, we remember.
Because fairy-tales will never die as long as we continue to allow the magic of the words to flow from generation to generation. 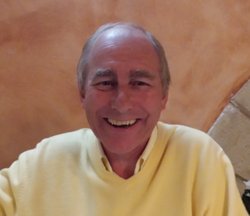 I was born way back before time meant anything. One zillion reincarnations later, I think I know who I am, but I am prepared for a second opinion.
I have always enjoyed medieval fantasy tales. Once I started, I could never put them down, often reading them into the early hours. I found myself living the characters that jumped out from the pages, and I always hoped that one day I could create my own world, full of vile creatures and true heroes. And after the passing of too many seasons I finally began to remove the ideas from my head and commence writing.
Several fantasy short stories arrived, and I found that the ideas came along quicker than I could type. My Drabbles also received a dose of fantasy magic, yet in the background, the dream of a novel grew.
It has taken many a month to produce a story that had lain dormant for so many years. Evil Never Dies - professionally edited - is my first novel and is a classic tale of good and evil set against a backdrop of green lands, snowy mountains and dusty plains.
I show the horrors of war, as well as the loyalty, love and fears of all those involved. I believe that all men are flawed, and I leave it to my readers, to decide whether I have succeeded in showing their strengths and weaknesses, their compassion and cruelty. For war brings out the best and the worst in even the gentlest of men.
I have let my mind wander freely over the words, and I hope that you will enjoy your trip into the world of my imagination.