Grrrowl, Tolor scratches an eyelid with a sharp claw and yelps when it slices his skin. He sits up and looks around, and chuckles.

"So Jena’s not up yet. I guess the floor is mine. My name is Tolor and I’m Jena’s most handsome of characters. Half man and half bear with an impressive scraggly beard." 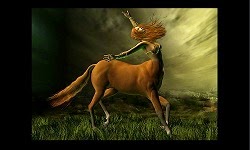 Selene laughs.
"What’s so funny?" Tolor asks.
"You."
"You should be nice to me. We are a couple after all, and not so loud, you’ll wake up the boss."
"Don’t be so pushy. I’m not your girlfriend until Jena wakes up."
"Shhh, Selene, a fan might hear you."
She rolls her eyes. “So what are you up to sneaking around here, Tolor?”
"I wasn’t sneaking. Check out this new photo Jena bought for me to use." He shifts to the right, then to the left.
"The woman never did have good taste," Selene mutters.
An unfamiliar voice speaks behind them.
"I don’t know. I kind of like the temporary body she gave me."
With wide eyes, Selene and Tolor turn toward the sound.

"Who are you?" Tolor asks.
"Ilan. From Veiled Memories."
Tolors lips shape into an ‘O’. “The angel. Wouldn’t wanna be you.”
Ilan shifts his body, ready to kick bear-man into the next dimension.
Tolor shakes his head, lips pressed together in a tight line. “Do you even know what she does to you in act three?”
Ilan scratches his pretty blonde hair and Tolor mimicks his action, making a show of flipping the ends. Ilan’s eyebrows narrow. “Sure, I get to go swimming.”
Tolor laughs. “More like crashing into the ocean, breaking your bones and fainting before you hit the bottom.”
Ilan crosses his arms across his broad chest, his wings turning maroon in irritation. “Really … Jena wouldn’t do that to me. I am her best character after all.”
"Says who?" Selene demands, stomping hard hoofs on the soft part of Jena’s brain."
"What are you doing here anyway? You’re not even published yet," Tolor tells him.
The world turns sideways and everyone screams.
"The morror’s moving," Selene yells in horror.
"What mirror?" Ilan asks.
But everyone disappears as Jena sits up in her chair and yawns. Wow, didn’t mean to fall asleep.
Now where was I?” she ponders tapping her pen.

Hot flash!
"Rewriting my story," Trahdoz bellows, before he fades from her dream.

Jena drinks a large glass of water and decides she better lay down for awhile. Every character moans with frustration.
"Way to go stupid dragon. She won’t be working on any of our stories now," Tolor says.
Trahdoz enters the lair in Jena’s mind, his tail trembling between his legs.