Showing posts from November, 2017
Show all

A Review of A Wild & Unremarkable Thing, by Author, Jen Castleberry

Now, with hair shorn and breast bound, Cayda marches into the Summer Alps as Cody, a hopeful Champion seeking a dragon-slayer’s reward, with the full weight of her family’s survival on her shoulders.

But the road between poverty and prosperity is rife with beasts, betrayals, and baser temptations. Sensible Cayda soon discovers that she is not the only Champion with her eye on the prize, or the only one wearing a disguise.

With monsters, gods, and royalty hot on her heels, Cayda must ask herself if victory i…
Post a Comment
Read more


When Alex Taleisin’s immortal DNA kicks in after a fight for her life against something not-quite-human in the YMCA parking lot, her Aunt finally lets her in on the family secret. They’re Immortal – Elementals to be precise. Only, Alex is a little something more, and until they discover what, her life is in danger.

Collum Thronus, Guardian of the Races and savage King of the Dragons has no choice but to protect Alex and find her father’s people. He made a promise and Collum always keeps his promises. Now, he needs to keep his hands of his charge.

Enter an insane grandfather, a shifter with a hidden agenda, and a witch with a shoe addiction and soon Alex is wishing for a quiet house in the hills with the dragon she’s falling for. But a ba…
11 comments
Read more

Saving the world, one tour stop at a time.

Join Bitsy in the second installment of her attempts to stop a magical war threatening Arizona and all those who call it home. With the help of a human, a sexy dragon, and the members of her band, Bitsy must stop an angry mob of chaos demons before the band leaves for their next tour stop.

It’s nice to be needed, but Bitsy has no idea how to defeat the demons and she just might get herself killed trying. But then, at least one problem would be solved...

About the Author Suzanne Lazear spins tales of the fantastic. She’s the author of the New Adult Elfpunk The Secret Lives of Rockstars (Leap Books) and the YA dark fairytale steampunk series The Aether Chronicles (Flux). Suzanne lives in Southern Califor…
Post a Comment
Read more


Tyler Richardson is freaking out! Not only did he invite his new girlfriend to meet his entire family, this is also the day they will exchange gifts. But what do you get a girl after dating for only two weeks? Should he listen to his friends and just give her a card, or should he ask for a second opinion?

Layla can’t believe she agreed to have dinner with Tyler and his family. What if they don’t like her? To make matter’s worse, they agreed to exchange Christmas gifts. The boy already has everything. And what if she gets him something that’s nicer than what he gets her? That would be really awkward. Asking him what he would like is completely out of the question. Maybe she should ask his friends for help.

Yubin knows she’s different than the other girls in the pop group SIITY. Yes, they all got sucked into the same machine, giving up schooling and signing ridiculously long contracts before anyone knew if they'd be successful, but that's how pop stars are made in Korea. Yubin is supposed to be thankful for that, but she isn't. She doesn't even like the girls she performs with.
She’s more connected to her former schoolmate Jieun, even though all they ever do is text. Over the last two months, Jieun has become her confidant and best friend, connecting Yubin …
Post a Comment
Read more


Elana Black. Saving the day even if she has to tear a hole in the universe to do it.

An unbeatable mythological horror has its sights set on Elana, and that’s not the worst of her problems. Gods want to use her, shadowy agents want to eliminate her, and a powerful sorcerer wants to kill her; all as she rushes to stop an event which portends the death of her best friend, Olivia. It’s all catching up with her, and just in time for Christmas. Elana is going to have to figure out how all of it is connected but she’s in over her head, outnumbered, and running out of time.

And she always thought magic would make her life easier.

There is also a limited release cover:


About the Author My name is Danny Bell. I want to tell stories and avoid writing author profiles. I read—when I should be interacting with people, I named my cat after a cat I liked in a book, I’m pr…
Post a Comment
Read more

Justine Avery: The One Apart - Excerpts and Giveaway


Only one obstacle stands in his way of enjoying a normal life. He remembers—every life he's lived before.


Tres is about to be born... with the biggest burden any has ever had to bear. He is beginning again—as an ageless adult trapped in an infant body.

He and his teenage mother face life filled with extraordinary challenges as they strive to protect, nurture, and hide how truly different he is. But Tres alone must solve the greatest mystery of all: who is he? The answer is linked to the one question he's too afraid to ask: why am I?

In his quest, Tres discovers that all is considerably more interconnected and dynamic than he could ever imagine—and fraught with far more danger. He cannot hide from the unseen threat stalking him since his birth.

Life as he knows it—as all know it—is in peril. And Tr…
2 comments
Read more

Out of the Shadows by Author Ashlee Nicole Bye - Excerpt - Giveaway

The Monster of Selkirk, Book 1, by C.E. Clayton

Monsters come in many forms, and not everyone knows a monster when they see one. After three hundred years of monstrous, feral elves plaguing the island nation of Selkirk, everyone believes they know what a monster is. Humans have learned to live with their savage neighbors, enacting a Clearing every four years to push the elves back from their borders. The system has worked for centuries, until after one such purge, a babe was found in the forest.

As Tallis grows, she discovers she isn't like everyone else. There is something a little different that makes people leery in her presence, and she only ever makes a handful of friends.

But when the elves gather their forces and emerge from the forests literally hissing Tallis's name like a battle mantra, making friends is the least of her troubles. …
Post a Comment
Read more

The Matriarch Matrix: An Interview with Author Maxime Trencavel 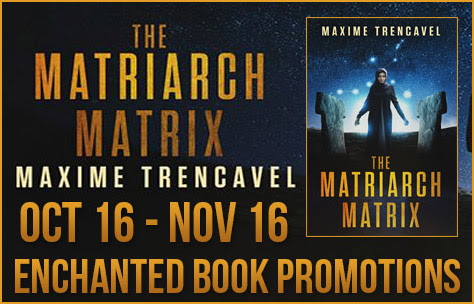 The Matriarch Matrix – A speculative fiction novel of origins, faith, passion, and the pursuit of peace.

The past foretells her future…

What does it take to change a loving child of peace into an assassin for a dangerous and powerful oligarch? Zara Khatum knows. Once a fighter for her Kurdish people, the memory of the atrocities inflicted by her captors has Zara seeking one thing: vengeance. But the voices of the ancients call to Zara. In the past, in another life, she knew the secrets of the artifact…

She is Nanshe, revered matriarch of the family she led away from the monsters of the north. In the land that would one day mark the treacherous border between Turkey and Syria, she created the temples at Gobleki Tepe and founded a dynasty, heirs to a powerfu…
1 comment
Read more


Seventeen-year-old Bryar Rose has a problem. She’s descended from one of the three magical races—shifters, fairies, or witches. That makes her one of the Magicorum, and Magicorum always follow a fairy tale life template. In Bryar’s case, that template should be Sleeping Beauty.

“Should” being the key word.

Trouble is, Bryar is nowhere near the sleeping beauty life template. Not even close. She doesn’t like birds or woodland creatures. She can’t sing. And she certainly can’t stand Prince Philpot, the so-called “His Highness of Hedge Funds” that her aunties want her to marry. Even worse, Bryar’s having recurring dreams of a bad boy hottie and is obsessed with finding papyri from ancient Egypt. What’s up with that?

All Bryar wants is to attend a regular high school with normal humans and forget all about shifters, fairies, witches, and the curse that Colonel Mallory the Magnificen…
Post a Comment
Read more


In a solar system where The Authority decides who lives and who dies, only one of their own assassins can stop them.
Glade Io is a trained killer. Marked at a young age as an individual with violent tendencies, she was taken from her family and groomed to be a Datapoint, a biotech-enabled analyst who carries out the Culling. She is meant to identify and destroy any potential threats to the human colonies. But when she’s kidnapped by rogue colonists known as the Ferrymen, everything Glade thinks she knows about the colonies, and The Authority that runs them, collapses into doubt.
Pulled between two opposing sides, and with her family’s lives hanging in the balance, Glade is unsure of who to trust—and time is running out.

About the Author Ramona Finn writes about courageous characters who fight to live in broken, dystopian worlds. She beli…
Post a Comment
Read more
More posts