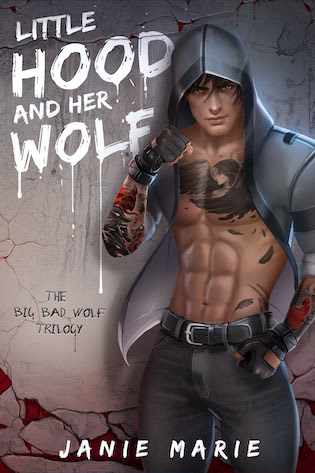 Little Hood and Her Wolf
by Janie Marie
(The Big Bad Wolf Trilogy, #2)

Kylie knew Logan Grimm came with a price. She just had no idea that the price was being told what to do by the most dangerous residents of Blackwoods.

She should run and survive, but Logan’s sweet words and even sweeter kisses keep her where she is.

Right where the Big Bad Wolf lies in wait.

Kylie blinked a few times and stared ahead. Janie was sitting across from her and Logan, and Ryder was pouring Dr Pepper into her glass. He opened a few prescription bottles, and Janie held her hand out without saying anything, waiting for him to pour a pill from each bottle. When she swallowed the last pill, she gagged a little before receiving a kiss to her forehead.

God, she really is crazy.

Logan squeezed Kylie’s leg under the table because she was staring with her mouth open.

“Have you never seen someone take medication before?” Ryder asked, his harsh tone biting at her skin.

Kylie swallowed and looked at Janie, who only smiled at her. It wasn’t the smile she’d given her yesterday though. It was forced.

“She needs to stop staring at you like you’re a fucking science experiment,” Ryder said, his voice louder as Janie cooed to him.

“She’s just curious,” Janie said, but even then, she didn’t sound the same. She sounded like a small child. Ryder didn’t seem to like that.

“Curious my ass.” He glared at Kylie.

“I’m sorry,” Kylie whispered, her heart racing under Ryder’s stare. He might not be the killer, but he was willing to be.

Janie put her hand over Ryder’s as she replied, “I take medicine to help with my PTSD and other stuff. Ryder helps me remember to take them because I don’t like to. Swallowing pills bothers me now.” Janie finally smiled, but it was all for Ryder.

“It’s none of her business.” Ryder’s voice was so loud it hurt to listen to him speak.

Gawain spoke up, putting authority into his order. “Boys, you both need to relax, or we’re sending Kylie home and taking Janie away till this mess blows over.”

“It’s fine,” said Janie when Ryder let out an angry noise at the threat being issued. Janie kissed Ryder’s cheek and whispered in his ear until he turned to peck her lips. He started eating. “He just doesn’t like people staring,” Janie said when Kylie still couldn’t look away, “or judging me.”

“Yeah.” Janie smiled, but it was clear she didn’t believe her. “Everything’s fine, right, babe?”

Ryder grunted and stuffed more food in his mouth.

Janie returned her focus to Kylie, her eyes flashing with fire. “Sleep well?”

Kylie tensed. “I slept fine, thanks.”

Those vibrant hazel eyes stayed on her for a moment longer before shifting to Logan. He was still glaring at Ryder, which might’ve been why Janie’s tone darkened. “Logan, put yourself in his shoes. You wouldn’t like someone staring at Kylie over any of her personal issues either. You know why it bothers him, and you know why he’s really mad.”

Logan fumed as he glared between the couple but said nothing.

Janie’s eyes narrowed. “And don’t forget you’ve reacted worse when something was said to her. This is the same.”

“It’s not the same,” Logan said between clenched teeth. “She didn’t say shit about you!”

Ryder slammed his hand down on the table and stood, glaring at Logan. “No, you just opened your fucking mouth and spilled every one of her secrets.”

Logan stood up, his eyes dangerous. Kylie grabbed his hand as Janie wrapped her arms around Ryder to keep him from lunging over the table.

“I had no choice,” Logan yelled back.

“Bullshit.” Ryder carefully peeled Janie off him and nudged her over to Gawain before stepping around the table. “We made one rule, Grimm. And that was to keep our mouths shut. I warned you not to say anything. Everyone warned you.”

“Stop.” Janie tried to break free from Gawain, but she was held tightly against her brother as Logan and Ryder stood toe to toe. “Babe, please let me handle this.”

Ryder ignored her and smirked at Logan. “You’ve been good on your word this whole time—but Blondie sucks your dick, and suddenly you’re confessing like a church girl who touched herself for the first time.”

Logan swung before the gasp finished leaving her lips. He hit Ryder right in the jaw, and it was total chaos from there.

-Little Hood and Her Wolf, The Big Bad Wolf Trilogy #2 Janie Marie is a native Texan and resides in her hometown north of Austin, Texas, where she devotes her time to family, pets, and her writing.
Much of her life experiences--good and a lot of bad--are where she has chosen to draw inspiration from to create her characters and stories. It's important to her to create the kind of characters she needs or needed at one point in time because she wanted to create something only the saddest souls would recognize as brave and strong.
Be ready for raw, emotional tales, as Janie never holds back. With her darkest thoughts she found light is still possible, that the sad girl can sometimes glow the brightest. Because she is beauty surrounded by darkness.