MEMORIES SO DISTANT AND BRIEF: The Dragon's Treasure, Book 4, by Guy Donovan ***Spotlight -- Character Interview with a Dragon*** 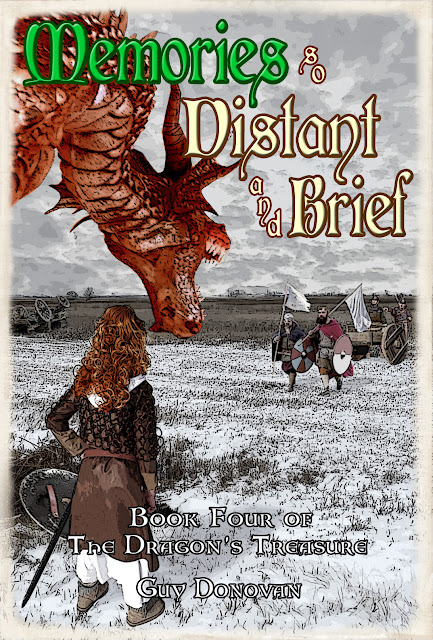 In this conclusion to ‘The Dragon’s Treasure’ series, friendships are made and renewed, battles won and lost, lives redeemed and cut short. Through it all though, the power of love and friendship takes center stage, culminating in a climax as emotional as it is intense.

Having escaped back to Môna with the help of her bully-turned-friend Tostig, Cerys means to find Talorc’s treasure and offer it to King Pedran in return for sparing her stepbrother’s life.

On the other side of the world, Talorc swims with his new family of humpback whales, torn between two halves of his fractured mind. One side urges him to return to Cerys, while the other continually reminds him of the hurt she caused.

Cassán, still a captive of the Picts, is more determined than ever to find some way back to Cerys, who he still believes to be living with Pedran, and convince her to go back north with him.

As with all plans though, none of them has any idea what actually lies ahead.

A Character Interview with Talorc

Welcome to JB’s Bookworms, Talorc. Why don’t we start with a simple question like, are you a good dragon, or a bad dragon?

Thank you, And that would depend, I suppose.

On whether you are my friend or not.


Oh, uhhh…I see. Why don’t you tell us a little bit about your story?

All right. I was born in a cave by the sea during a storm while my other and a human killed each other in a fight.

The one who laid my egg.


I see. Your mother.

Cerys called her that too, but that is a human word. Dragons do not have families like you humans do, so it was a long time before I learned about mothers and fathers.

She is my young human friend. We met in that same cave where I was born.

She is my best friend ever! When we met, she was…you humans use words like ‘stupid’ and ‘idiot,’ but she always said she was born simpleminded. I think that sounds better too, don’t you?


It’s certainly more polite. How did you two meet?

Well, that is sort of a secret, but let’s just say we have a lot in common. Her others were dead then too, like mine, so we sort of connected that way. She even named me after her father!


I notice that your mouth doesn’t move when you talk, but I hear you just fine. How is that?

Dragon’s hear each other’s thoughts, which his good since we do not have lips.


I see your point. And humans can hear your thoughts too?

You are telling me! It’s all part of that secret I mentioned before though, so ask me something else.


Fine. Why don’t you tell me who your favorite character is in The Dragon’s Treasure?

Cerys, of course. I had to rescue her from being killed and took her far away from her home. After that, we lived in the wilds up in the mountains where we really only had each other. I have actually saved her life a few times, but she has helped me too, so we rely on each other very much. One time, a tribe of Picts chased us all the way up past a big wall and nearly killed us when my wing was injured and I just could not run anymore. Between Cerys and I though, we managed to kill all the Picts instead. I was fine with that, but it bothered Cerys a lot.


I can imagine. It doesn’t sound like an easy life for a little girl. She was lucky to have you though.
We were lucky to have each other…even if it was not really luck at all. But that is—


Part of the secret. I get it. What about your author? Do you feel like he portrayed you and your species correctly?

As good as any vermin could, I guess.

While I was still in my egg, my other’s thoughts got mixed up with mine, so I remember many of the things she did when she was still alive. She thought of humans as ‘vermin,’ so I guess that humans and dragons were usually enemies.


Is there anything you would change?

A lot! But if I did, I suppose our story would not be as interesting.


Mmm. All right—you’ve got me there, Talorc. Forget I asked. Sooo…have you eaten any maidens lately?

Ha ha. Cerys taught me about humor, and that’s not very funny.

One of Cerys’ friends was sacrificed and it made her really sad, which makes me really angry!

Whoa! Is that smoke coming from you? I apologize! Please don’t burn the place down. My husband and I just bought it and I’m not sure the insurance is in force yet.

Well…all right, but only because Cerys would not approve.


<mutters> I should’ve done this with Cerys, I think. <louder> Okay, thank you. So, has your auth—I mean “vermin” written any other books?


Some short stories, I think. I cannot read, of course, but his mind is full of other tales about fish-men, time travelling gift-deliverers, and…what is the term? Oh, I know—goblins!

Yes. One goblin in particular who, I do not know if I have this right, but…a goblin who works as an…underwear model.


Okay! That’s all the time we have for now, Talorc. Is there anything you want to add before we end our interview? No? Perfect. Thank you for being with us today. Good luck with your book.

Keep reading for more information on Talorc and Cerys in The Dragon's Treasure, by Guy Donovan. 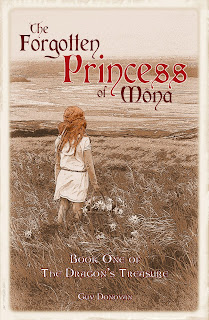 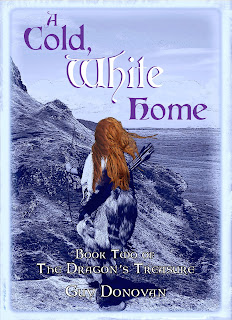 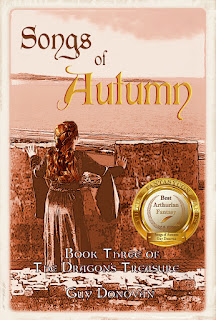 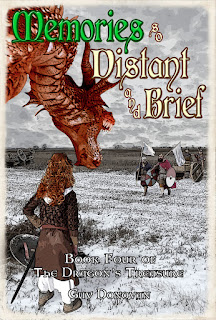 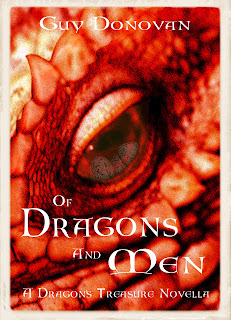 In a previous career, I worked on both television and feature films as an animator and storyboard artist/designer for Marvel Films, Hanna-Barbera, Sony Pictures, DreamWorks SKG, and Warner Bros Feature Animation, amongst others.

When the traditional animation business dried up in the early 2000’s, I chose to get out of the industry rather than be thrown out of it. I then began working for the U.S. Government in return for a steady paycheck, allowing me to continue my wasteful habits of eating and providing for my family.

I now live in North Dakota, USA with my wife and daughter. Starved for creativity by my job with the government as a mindless drone, I turned to writing at the advice of my wife, who is also a writer of screenplays and novels. That led to my current obsession with 5th century Wales, as that is where my newly completed ‘Dragon’s Treasure’ series is set.