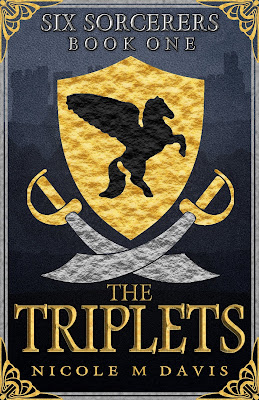 Sarenia is a land choked with turmoil, courtesy of its tyrannical king, Shirot Tybold. It’s not surprising that a rebellious group of sorcerers has taken it upon themselves to overthrow him. While the King busies himself searching out and destroying unregistered sorcerers, the rebels are gathering their forces.

Those forces include Anna Thomas (the captain of a pirate ship), Kaylor Williams (a knight in the King’s Guard), and Sarah Miller (a dragon rider), three best friends and powerful sorcerers who come from a place drastically different from the magic-filled land of Sarenia: Denver, Colorado. A power-hungry rebel sorcerer with an unshakable belief in an old prophecy is the reason they’re so far from home.

But the prophecy calls for three others: a rebel agent is sent to Denver to find Tyler Martin, Alex Scott, and Max Harrison and bring them back to Sarenia.

What’s so special about these six teenagers? Why does the prophecy call for them specifically when Sarenia is full of other sorcerers, some with far greater powers? And why should they cooperate with the rebels when they’ve been ripped out of their lives without warning or explanation and dumped in a world full of dangerous mythical creatures?


I don't like traditional gender roles. This should become apparent pretty quickly to anyone who reads my book.

I did eventually find Tamora Pierce, whose writing I absolutely adore. And as time went on, better stories with better characters were told. Still, I wanted to write something different.

I tried to give my girls the "boy-roles": Kaylor is the "knight in shining armor", Anna is the "bad boy", and Sarah is the "charismatic young leader" (you won't see much of this in her yet, but I promise, she'll get there). Likewise, I tried to give the boys roles that are usually given to female characters: Tyler is Kaylor's damsel in distress and Darn is the whiner (Alex does his own thing for other reasons).

I've also taken some common plotlines and switched the genders up (i.e. father goes off to war or work or to do something important, son must leave home to find him or follow in his footsteps).

I had a lot of fun doing this, and I think 16-year-old-me would have been exstatic about my book. I hope my readers will like it just as much as I would have!


Nicole M Davis was born in Sunnyvale, California (one letter away from the vampire capital of the world), but she grew up in Boulder County in Colorado. She has a bachelor’s degree in Zoology with a minor in Creative Writing, which she got in the beautiful town of Laramie, Wyoming. At the moment she’s back in Boulder County living with her family and a small army of scaly pets. She probably started writing when she was about five years old, and hasn’t been able to stop since.