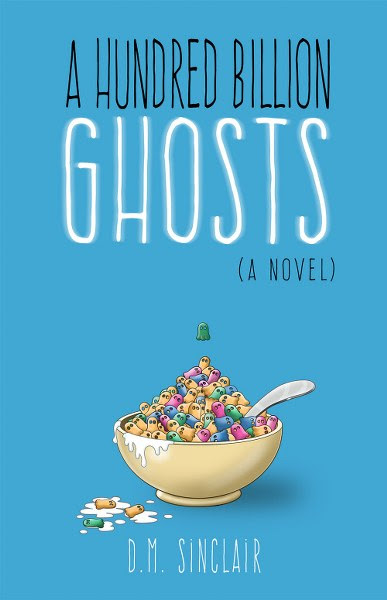 What if one day, ghosts suddenly weren't invisible anymore? The paranormal becomes normal in this fast and funny, wild and twisty ride through a world teeming with the ghosts of every dead person ever.

Ryan is a planner. Always two steps ahead, living in tomorrow. But sometimes, things just happen. Like the ghosts of every human who ever died suddenly materializing and making the whole world haunted. That was a bit of a surprise.

Ryan's new plan: to get a fresh start on life by joining the dead. One sketchy experimental procedure later, he has left his body behind and become a ghost. And that's when things start to go wrong.

Realizing he made a terrible mistake, Ryan wants to be alive again. But his body has mysteriously vanished. And whoever took it will do anything to make sure he never finds it. Now Ryan has just ten days to race across the ghost-infested world and get back into his body, or be obliterated forever. Also, he missed breakfast.

A wild ride perfect for fans of Christopher Moore and Neil Gaiman, A Hundred Billion Ghosts is a "hilarious and compelling" paranormal mystery thriller with "just the right balance of humor, poignancy, and twists".


Ghost number one in Ryan’s apartment was Benny, killed by heart attack in 1983 at the physical age of thirty-eight and the mental age of about twelve. He had busied himself since his death by scaring people: making things move on shelves, writing threatening messages in dust, and so forth. Before the Blackout, when ghosts were still invisible, he would have been called a “poltergeist”. And indeed the movie of that name had come out shortly before his death, and he cited it as inspiration for his post-death hobby. Benny still kept up his old habits even after the Blackout, not bothered by the fact that he could now be seen doing them. What might once have seemed like the machinations of a terrifying trickster spirit, now seemed like a fat guy in a tracksuit being a bit of a jerk. Ryan had one morning caught him on the kitchen counter, trying and failing to open all the cupboard doors. And every time someone knocked at the front door, Benny would bolt for it first with a cry of “I’ll get it!”. Yet in the years Ryan had been there Benny had never once managed to get it open. These tricks were an annoyance, but Benny was otherwise friendly enough. And he spent a lot of his time out of the apartment, “scaring” people elsewhere. So Ryan didn’t mind him.

The second ghost was a man whom Ryan took to be an Algonquian tribesman, likely dead since long before the Europeans had even arrived. He wasn’t inclined towards communication, so Ryan didn’t know his name or anything about him. He spent nearly all of his time fairly unobtrusively in the fridge. If you opened the fridge door you could see his body up to the neck, and if you opened the freezer door above it you could see his face staring at you in astonishment over a bag of frozen Lima beans. Ryan so rarely saw him that he didn’t mind him at all. Ryan would say the occasional hello when he needed to get ice cubes, and the ghost might, on a good day, grunt in reply. But that was about the extent of their interaction.

The third, of course, was Sye. Sye was the problem.

If you've ever turned on a TV and are not picky, you've probably seen something written by DM Sinclair. He's done more than a hundred hours of that stuff, and will happily take the blame even for shows he didn't write.

Later he thought it might be nice to write books for a change. It isn't, though.

Nevertheless, he intends to keep writing as long as he is alive. After that he plans to visit Australia.