An Interview by Brad Miltner from 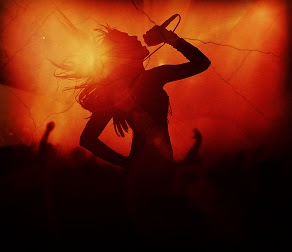 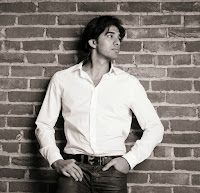 Music that Pops has requested an interview with the musicians from Pretentious, the newest, and hottest fictional band this year.

Brad shakes Danny's hand as he sits in the hot seat."Thanks for coming out today, Danny. I know you've been busy with your first tour.

Danny Rosani plays keyboard, and is the frontman of Pretentious with his new wife, Aryn.

So, how did you come to be part of Pretentious, Danny?
Mark and I were jamming together and Aryn insisted we create a band. (Laughs). Seriously, while that’s true this was always our dream.  Aryn just gave us the shove we needed to play it forward.

How do you feel about the rest of the band members?
We were all friends before we started. I love every one of them. We've all worked hard and they continue to work hard every time we set foot on stage, or pick up an instrument. They are phenomenal people.

The band contributes a lot of its success in you bringing them together. How do you feel about that?
It was Aryn that brought us together, Mark and I were childhood friends, but we all knew each other pretty well. We have our ups and downs, but it’s not about any one person, so things usually fall into place. We’re a team.

What is your favorite part of success?
The fans.They get pretty crazy sometimes, but we wouldn't be here without them, I love them.

Brad bends forward, smiling.
Give us an example of crazy. You know we all dream of being a Rock Star.
Danny laughs and runs a hand through his hair.
Fans scream when they see you. Selfies galore. Women throw bras at you. Nothing out of the ordinary.

Brad laughs.
Who or what inspires you.
Aryn has been my inspiration since the day we met. My band mates and family inspire me too.

What’s it like being married to Aryn Morgan?
Being caught up in a whirlwind. She's always pushing forward, no matter what happens. There’s no one else in the world like her. I wouldn’t want anyone else.

What are your plans after the upcoming world tour?
Back to the studio. We're going to keep the ball rolling. New songs, new videos, more interviews. I also run a restaurant with my mother. She's great, everyone calls her Mama because she has the maternal thing going. My Father died when I was really young.

Who helps them when you're away?
My sister Becky, and we have employees that have been with us for years. Most of them could ran the restaurant without a problem. (Laughs) I'm so unnecessary. They keep throwing me out to make more music.

Sounds like a good bunch of people.
Tell me about an onstage moment that impacted you.
Every time I step on stage and see our fans I’m inspired. It's still all surreal for me.

What are your dreams for the future of the band?
To stay progressive. Always moving forward.

How has being a part of Pretentious affected you?
(Laughs) It would take me a week to answer that question. I've met some incredible people. Adan Harris, and the Sand Sharks have helped us every step of the way. It’s shown me that we can do anything and how blessed I am. I have the greatest family, and friends, The best wife and awesome fans.  Seriously, what more is there?

What can we expect from Pretentious in the future?
More music. We’ll be going from the road to the studio. I think Adan is already working on our next tour.

What an incredible opportunity to have Adan Harris managing for you. Any new band would give an arm or leg to have him, especially after he stepped out of the limelight. How did that happen?
Danny shakes his head. Seriously, I have no idea. We contacted him to produce our first CD, and he and I just hit it off. Outside of Aryn and Mark, he's my closest friend, I can't imagine another manager.

Last question, I promise. I know you're probably exhausted being on tour.
(Danny nods)
How has success effected you?
It’s shown me what a great family I have, and to keep moving, not to let anything ever get me down.

Sounds like good advice for all of us. Brad extends his hand and Danny takes it.
Thank you for stopping by today. I feel like I got to know Pretentious a little more. We'll be interviewing the rest of the band in the days to come. I believe we have Aryn next week.
(Danny nods as he stands). "She's looking forward to it. Any chance to tell tales about me."
Brad laughs as they shake hands.
"Thank you for having me,"

Danny promised his dying father he would take care of the family, but a promise looks much different when someone is twelve than it does at sixteen. When his sister leaves for college, he realizes he’s trapped in his father’s dream. He runs the family restaurant with his mother and tucks his own dreams away, until he falls in love with Aryn, a girl in his chorus class.

Pretentious is a series of YA/NA novellas that follow Danny and Aryn in their attempt to create a band and follow their dreams, while honoring Danny’s commitment to take care of his mother, a nurturing Italian woman everyone calls Mama, and his sister, Becky. It’s a story about family, commitment, love and the confusion of betrayal.

Read it free on kindle unlimited and prime, or purchase your copy here:
http://tinyurl.com/Pretentious-Vol-1