Character Madness Monday-Interview 4 of 5 The Followers of Torment


Tell us about your story

It is a long and sad tale.  However, I did overhear you speaking with Raonal.  You wish this to focus on the part that involves the Master.

For that, I cannot say much.  I met him after I had just been freed for misconduct by my previous master, and he was in such pain.  It called to me like none have before.  Though I am an outcast Guardian, I also remember when I was still in the tribunal’s good graces.  The tale being told, I hope is one of redemption.  One that perhaps will enable all those with the Master to be redeemed into the good graces of our respective people.

I am a healer.  Though I can heal the body, I prefer to focus on healing the heart, soul, and mind.  For the Master, I am a beacon of what he should aspire to, rather than the filth and corruption he has wallowed in for too long.

I hope it is a love story.  One of self-love.  One in which everyone shares the love of accomplishing the impossible, and achieving the unattainable.

I do not descend to such as the gossips.  When I hear it, I ask to be excused.

• To be what I was before I was condemned.  To be a Guardian, capable of saving those who need to be saved.

Because to see joy, hope, love, and happiness spread is what I desire most.  I can do it as I am, but I can do it better when I am whole.

With my assigned charge, though between assignments returning to my own Realm would be nice as well.  The place where there is no sorrow that is unplanned, or fear or hate.  It is a place to recover when you have been worn down by this Realm, and can do no more.

Where ever the Master is, is home.  For now, it seems we are on the road.  He has not yet claimed any place as home, and I wonder where he is from that he does not settle where he is.

I was too young for such games when I was punished, and have not been home since.  Each of my Masters, for a time is like my spouse, though I would bear them no children, even if we were compatible.  It is when they free me that I would, but at that time I can stand to be with them no longer.  The do not need me then.

I think, should I ever redeem myself enough to go home, that I would be forever alone.  The few who were similarly punished are names to be learned as examples of what not to do.  Now, my name has been added to that list.

I have no fur, and with my primary feathers plucked and scorched, I have nothing to compare against. The pain at the time was unbearable, I think even less than when my wings were shattered.

My tribunal, though they do not figure in the tale of my Master.  They have the ability to deny me entrance to my home, even though I have redeemed myself.  I know of no greater challenge than to turn Master away from the evil he has become.

Of us all, I cannot say.  Each bears our own sorrow and suffering that is greater than our joy and happiness.

Honest, pure, and as kind as she can be with the tale we have to give her.

Very well.  Perhaps, if anything, she showed me in a better way than I deserved. 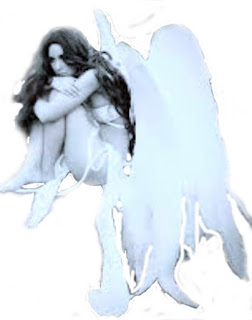 This is the closest to whole my wings have been since I was cast out. 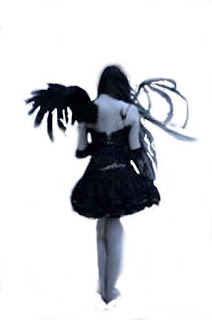 This is very much what I looked like when my first mortal Master found me, and taught me how to help those of the mortal realm to turn away from their evil.  Though, the painter missed some of the bones, and I have not been able to hold my wings in such a pose since the day I was cast down.