Hey Everyone, It's Character Madness Monday.

The Five Kingdoms of Severi 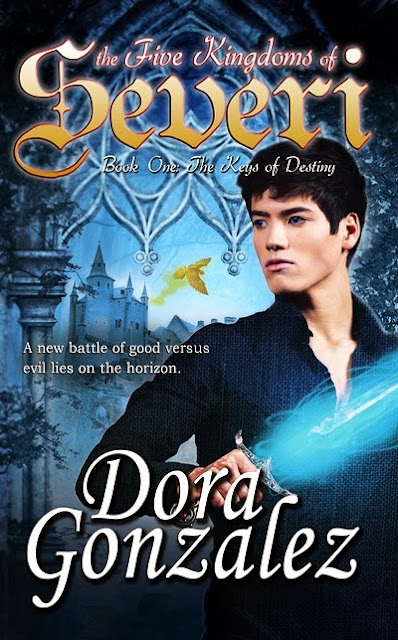 Selene strolled through the meadow enjoying the sunshine. Colovere ran through, playing with his herd. She stopped when she heard Tolor's voice behind her and turned to find him walking toward her with Juliette, a young stranger took long, confident strides beside them. 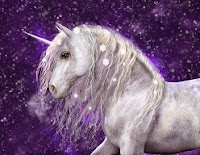 They stop and Juliette motions. "This is Edwin from The Five Kingdoms of Severi, he's your interview this week."

Selene's hooves tear at the foliage. "You're a little early. Wonderful." 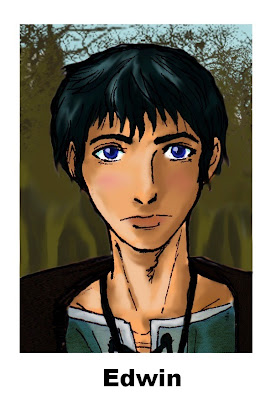 “If I didn’t come now who knows when I would be able to wander from the rest of my group.” Edwin tugs at his belt strap holding his sword and tries to keep his gaze from wandering to the centaur’s lower body. This was his first time seeing such a creature.

Selene blushes but she was used to it. Still, she was grateful Tolor hadn’t noticed. "Shall we walk?" She asks, leaving the others trailing behind.

"It's good to meet you, Edwin. I hope you didn't have too much trouble finding your way to our world. But I've heard that you're familiar with journeys. Will you tell where you're going and why?" 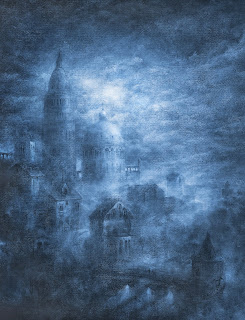 “I am heading to the King’s Hold located in the Second Kingdom of Severi. One of my companions seems to believe that I will find the answers to what ails me there,” Edwin replies, his words suddenly reminding him of the markings showing from the edge of his sleeve. He quickly tugs the sleeve down and over his glove.

"Aren't the kingdoms in Dora's imagination at peace right now?"

“Yes, but an unknown assailant is stirring up trouble. In fact my own village was…” Edwin trails off, his eyes setting on the landscape in the distance but his mind searching beyond what the visible eye can see. “I’m sorry, I seems to have trailed off,” he replies dropping the subject and continuing his walk.

"I've been trapped behind the mirror since I was a filly. What is the journey like? Are there challenges?"

“There are many trials, stumbles and challenges to say the least. This being my first journey I can’t say if it is harder than most have faced.” Edwin tugged at his sleeve again and tried his hardest to smile.

"Who accompanies you on your journey? Surely your Author isn't making you travel alone."

“I kind of wish I was traveling alone,” Edwin smirks. “Alden, the one who suggested I head to the King’s Hold, constantly orders me around as if I was his servant. But he does make the journey colorful to say the least.” 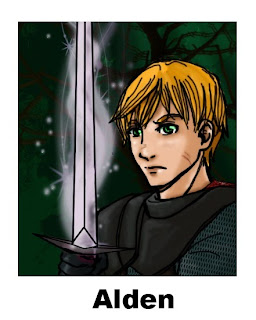 Is your realm a magical one?

Edwin sighs and ponders on what to say or more like how to say it. “I don’t want to give much away, but what we have encountered so far can only be explained by magic. There are creatures I never thought existed and I am sure I will meet far more before this journey is done.”

"What is your part of the story?

“I’m the main character of course,” Edwin’s smirk widens. “Though if you ask Alden he might argue on that fact. My role in this story is to vanquish the evil that threatens the peace in Severi and get revenge on those who robbed me of my family and friends.”

"Is there anything precious that you hope for?"

“That my parents are still alive. I’ve seen so much death that I wish they aren’t among those no longer residing in this world,” Edwin went on, his smirk long gone.

Selene smiles and glances at Tolor. "How about a girlfriend?"

“I don’t think there is time for one right now with fighting to stay alive and trying to prevent a war.”

"What do you do when you're not trying to save the world?"

“I mainly practice my swordsmanship and try not to lose control of my new found powers.”

Selene looks up to see Juliette with Tolor and Colovere staring with anticipation, and sighs. "They don't get out much. Heard any good gossip lately?"

“I’ve heard that there are strange occurrences near the shorelines of Severi. Some say it is the work of mermaids. At this point I wouldn’t be surprised.”

Everyone smiles and Selene scowls.

“I fear our time must come to an end,” Edwin says holding on to his crystal hanging around his neck and trying to hide the shimmer it emits.

I need to finish this up too and get our dinner on. Juliette can't cook anything that tastes good and Alexis is only marginally better. Ezra won't say anything since he loooves her. Pah!
Is there anything else you'd like to share with our audience today?

“There be dragons in The Five Kingdoms of Severi. If they want to know how many and what their role is in this story they will unfortunately have to read the book,” Edwin replies satisfied with the teaser he has just revealed.

Dora Gonzalez is currently working on her third novel. She enjoys writing the occasional short story, dabbing in flash fiction, getting lost in a video game, and hunting down the next book to fall in love with. She also loves to paint, design book covers, and go sight-seeing. She lives in Texas with her son and three miniature poodles. 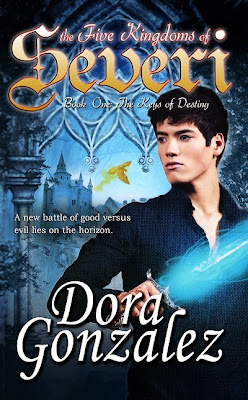