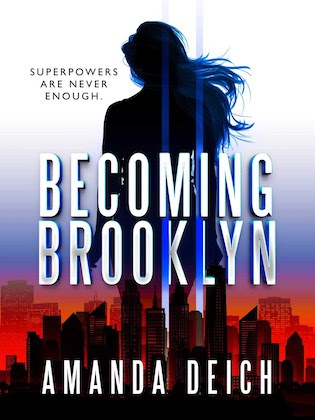 Eighteen-year-old Brooklyn never knew her father. Rex Blackburn died in the 9/11 attacks four months before she was born.

And even though she never met him, she always dreamed about what he must have been like before he died. In her mind, he was a hero.

Little did she know.

After an attack at a 9/11 memorial gala, Brooklyn learns her father had been a member of an elite, anti-terrorism, military task force, made up of a very select group of people who had superhuman abilities. On the day the towers fell, he died using his power to save people.

The Army believes she inherited his gift, and Brooklyn is invited to train at West Point in order to hone her skills. Knowing deep down she is different than anyone else her age and wanting to learn more about a father she never knew, she readily agrees to become a cadet at the prestigious military academy.

She and five other 9/11 babies strengthen their superhuman abilities and spend weeks preparing themselves for their future in the army, fighting terrorists at home and abroad. And in the process of training, they identify with their deceased parents in a way they never knew they could.

Brooklyn knows she’ll go to war someday, but when terrorists find out about the group’s gifts, they don’t bother to wait.

They bring the war to West Point.

“Why do you need to talk to…just us?” Bree asked, her stare critical and questioning. “Why not all the 9/11 Babies?”

The general nodded, acknowledging the fairness of her question. “You would probably instinctively group yourself with the rest of the kids who had parents die in the attacks of 9/11. And while the entire group of 9/11 Babies have been branded heroes – appropriately, I might add – the six of you are different than the others who attended the dinner the other night.”

He brought his hands in front of him, clasped them together casually in front of his broad torso. “In fact, I’ve been assigned to talk with you all this evening regarding this difference. But before I begin, please know I am about to tell you something that is quite possibly the most sensitive, most valuable, most protected secret in our military today.”

My heart picked up speed. Suddenly I felt like I was sitting in the principal’s office, in trouble but not quite sure why.

The general pursed his lips. “It may take a while to explain. If I may, I’m going to ask for your patience as I attempt to do so.” He walked slowly toward us, clicking a button to lower a white screen behind him. It hovered above the fireplace as if it were a painting.

“I was thinking about the best way to inform you on the topic, and I decided I should start with what you already know: what you see in the papers and what you’ve learned in History Class.”

The six of us took turns shooting uneasy glances to one another, and the general, like so many teachers, pressed on, despite our obvious lack of enthusiasm.

“Even before the terrorist attacks on 9/11,” he explained, “the United States of America was the world’s leader in stopping terrorism. We continue to fulfill this role today.”

As if to prove his point, the screen behind him exploded into pictures of ongoing warfare. Bombs, tanks, and horrific blasts filled the screen.

“Terrorists know no geographical boundaries,” he continued as the pictures ceased, “but neither do we, when it comes to humanitarian issues. When the U.S. was young, we were spoiled by our location. Oceans separated us from the rest of the world’s conflicts, so we were primarily concerned with our own. But after the atrocities of the Second World War were exposed, we knew we needed to make a global effort to combat the evil that existed outside our borders.”

“The way we did this was to develop our best, most gifted citizens. We identified them at a young age and used our training facilities to nurture their gifts, pushing them as hard as they could be pushed, and making sure those gifts weren’t wasted. Soon, we had enough of these gifted warriors to form an elite military group. Its earliest members named it The Crest.”

“And what does this have to do with us?” I asked. I mean, it was nice of him to give us a history lesson and all, but the anticipation of why we were meeting with a general was killing me.

“Patience, Brooklyn,” General Richards replied, his tone implying he was losing his own. “I promised I’d explain, and I’m about to.” He turned to address the whole group again.

“You are six of the so-called ‘9/11 Babies’,” he began. “But you are a special six. The hundreds of other 9/11 Babies lost their parents heroically on that horrible day, and you did, too. But your parents were more than heroes.”

He paused, making sure he had our undivided attention. We weren’t breathing; we couldn’t.

“You would probably think of them as superheroes, members of the very same group I described.”

His gaze intensified. “They were part of our most secret, gifted branch of the military: The Crest: Chosen, Rare, Elite… Superhuman and Triumphant.”

Amanda Deich is an author out of Littleton, CO. In her non-writer life, she is a teacher and coach to hundreds of kids, and she is a mama to two. If you meet her, she'll talk Jesus and identity like no one's business.