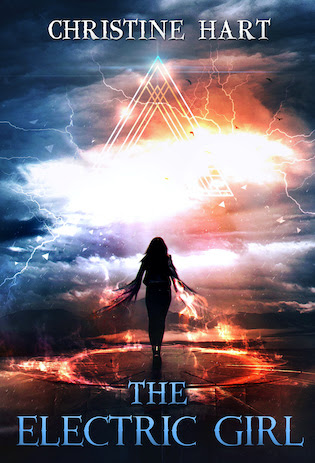 The Electric Girl
by Christine Hart

Polly Michaels is trying to forget that her mom has cancer. She keeps busy at school and plods through a normal social life. Until a freak electrical storm and a unicorn appear in the orchard next to her house.

Sy’kai wakes on an orchard floor to the smell of rotting cherries and wet earth. She doesn’t know where she is—or what she is—but she knows something is hunting her.

Polly recruits her friends to find the mysterious creature she saw from her window while Sy’kai, a confused shape-shifting endling from another dimension tries to piece her mind back together. Once the human girls find Sy’kai (whom they nickname Psyche) the mystery unravels and the danger facing all of them comes into focus.

A gritty struggle ranges throughout the girls’ rural hometown and in the wild terrain around it. All while two questions hang over their heads. Can an alien deliver a miracle for a human mother? Can a group of teens defeat an interdimensional demon?

Polly crept softly downstairs and into the vaulted kitchen. In the window behind the double sink, her mom’s stained-glass butterfly reflected a glint of moonlight. Her gaze darted from the window to the sliding glass doors across the room, behind a small round oak table. A greasy takeout box and two plates of chicken bones on the counter—her mom’s only half-eaten—glistened in the faint light. She paused next to the table, gripped the padded back of a dining chair, and leaned toward the glass door. She peered out, across the backyard and into the orchard.

A large beacon of light flickered in the trees. It moved, as if floating. No, not floating—walking. The intense glow, marked by dark strips of trunk and branch, moved at a measured pace. She squinted, trying to make out an outline of . . . whatever it was that meandered through the trees.

She lifted the latch on the sliding glass door and gently opened it. Chilly night air rushed in, smelling of ozone and the earth. Her flannel nightgown billowed in the breeze. She placed a bare foot on the smooth concrete of the patio. The cold was sharp and shot straight through Polly, causing her to gasp, but she forced herself to keep moving. She stepped all the way out and slid the door back into place, almost closing it but not quite.

The roving light in the orchard had grown larger. It was weaving between the dark rows of trees in the distance. The undulating pace of it . . . it wasn’t human. Whatever it was, it was moving—walking, she thought, but not on two legs.

Polly put one foot in front of the other, compelled by her need to know. She crossed the backyard, reaching the bumpy bare earth of the orchard floor. She steadied herself against a tree trunk as adrenaline raced through her veins. She leaned into the tree, hoping to conceal her figure without losing sight of the creature, whatever it was.

She waited, watching in both awe and terror as the glowing animal came closer. The creature made no sound at all. Polly watched, eyes trained on the glow itself, until finally she could make out a shape—a long, muscular torso flexed above four knobby legs. Pointed ears flickered.

The horse turned its head, flashing a spiraled horn—unmistakable against the dark branches around them.

“Polly? Are you out there?” she heard her mom call. She turned to see her mom’s silhouette standing in the kitchen. Her mom flicked on a light, spilling yellow across the yard. Polly whipped around to see the unicorn again, but the orchard had grown dark, full of silent indigo trees.

The glowing animal was gone. 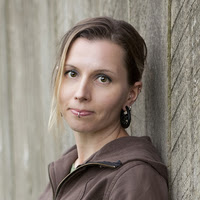 Award-winning author Christine Hart lives on BC's beautiful West Coast. She loves writing about places and spaces with rich history and visually fascinating elements as a backdrop for the surreal and spectacular.

Christine has an undergraduate degree in writing and literature, along with a professional background in communications and design. She is a member of the Federation of BC Writers and SF Canada.

When not writing, she breaks stuff and makes stuff - in that order - for the Etsy shop Sleepless Storyteller.