Hi, I’m Jena Baxtor, author of Reflections, Veiled Memories, and The Carriage, and I’m your host for this stop in the Hunt.

Somewhere on this page is a hidden number. Collect all the numbers from all the authors’ posts, and then add them up. Once you’ve added all the numbers, and if I am your last author, please head to the official website and click on the ENTER HERE page to find the entry form. Only entries will the correct number will qualify to win.

The author I’m pleased to be hosting for Virtual FantasyCon’s Blog Hop Hunt today is author,

Free will is a funny (and fickle) thing. We live in a world in which the choices we make define our character and affect our future, but in which bad things still happen to good people. Choices made with the best of intentions can still lead to devastation, while choices made in selfishness can bring good to everyone. What, in such a mixed up world, makes a choice the “right” choice?
In my debut novel, Choosing Her Chains, a young outcast by the name of Alisandra must navigate questions of free will and consent. Abandoned by her mother as a toddler, Alisandra finds refuge in ReObsol's conditional welcome. When its priests discover her magical handicap, they curse the child as she'obfus. Yet buried within herself she finds gifts that neither the high priests nor Alisandra herself could ever imagine. Those gifts could lead to ReObsol's destruction--or its salvation.
Now a young woman, Alisandra lives and works in ReObsol’s shadows under the tutelage of the widowed weaver, Amalra. In exchange for Amalra’s protection, Alisandra begrudgingly bears the shackles of outcast. Everything changes when Ryshel–Alisandra’s secret paramour–ends their liaison to accept a sacred handfasting to Sylvin, the tribe’s heir apparent. For the first time, the heartbroken Alisandra must decide how to direct her own path. To do so she must question everything she thinks she knows about ReObsol’s tribe, its past, and her own place within it.
Loosing one set of chains often requires the willing acceptance of another. In a land ruled by submission to pious tradition, her growing yearning for liberty may be the siren that unwittingly calls forth revolution. 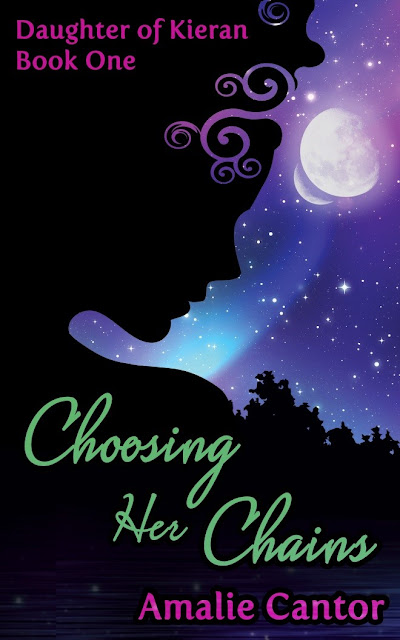 Alisandra had always known she lacked the brilliance of the colored souls that filled ReObsol. The Test had given disappointing finality to what her heart had always known.
The colors in the weepings shifted. Both now waning moons spilled through and draped beams over her form. Her eyes narrowed to slits as another stray ray of light fell upon the lake’s center, illuminating the tip of the obelisk just below its surface.
Alisandra. The word echoed not in her ears, but in the very center of her chest, where a ball of glowing warmth took root. The not unpleasant sensation grew and expanded, until its heat filled her from toe to fingertip, her skin tingling from the intense sensation.
“What would you have me do?” she whispered into the darkness.
The heat in her chest grew warmer, the voice more insistent. Swim, Alisandra. Fear not for your life; there are far more important things to be lost.
Without conscious decision, Alisandra stood. The wind sped to whip through her disheveled curls as she carefully placed one step in front of the other. She paused for only a moment at the water’s edge before taking her first cautious step into the eerily still water.
Almost at once the heat within her chest fought against the instinct to run, to withdraw, to escape the bitter chill of the water. Within seconds the cold had frozen her 99 feet. Her skin nearly blistered and broke open in icy pain, yet Alisandra could not stop. One step. Five. Ten. The water rose to cover her torso, and Alisandra could walk no further. She gingerly lifted her feet and kicked toward the lake’s center. With each stroke she grew heavier, more exhausted. She knew not why she swam, though her rhythm never faltered.
Less than a meter from the center of the lake, where the obelisk sat submerged, the spell shattered. The comforting fire that had settled in Alisandra’s chest fizzled out. The warmth abandoned her to the mercy of the water. Her limbs froze and refused to move, and the depths gradually drew her deeper, until her lungs could no longer find oxygen. Alisandra smiled and let go, surrendering to Kieran’s darkness. As her lungs encountered the first blast of water, her spirit awoke.
“Life always means more than death, Alisandra. Death may accomplish great and wonderful things, but with it all possibility for change is extinguished. Life brings infinite opportunities for change, if you will fight for it.”
The words of wisdom, first spoken in the hours after the emotional devastation of the Test, now cut through the haze of Alisandra’s mind. She chose to fight. Her muscles screamed in protest as she attempted to kick toward the surface, but the icy waters stabbed at her skin like hot pokers. The determination of Alisandra’s mind could not overcome the weakness of her body. With a spark of panic, Alisandra realized that she was surely drowning. Her lungs struggled in spasms of pain and hunger as her already poor vision dimmed. The haze descended once again over her thoughts as her body sank further and further from the surface.
A firm grip coiled around her wrists, and a surge of hot lightning ran through her veins.
Do you wish to live? an unfamiliar voice whispered into the darkness.
Her mind answered without her consent: Yes.
Then make it so. Reach out, and take what is yours.
With the last of her strength, Alisandra stretched her arm toward the obelisk. Her vision grayed as she placed a palm against its cold, smooth surface. The heat in her chest reignited in a fireball of light and filled her to the fingertips with warmth. The last of Alisandra’s breath escaped, and she closed her eyes in peace even as her world faded to black.

Amalie Cantor, author of the Daughter of Kieran fantasy series, identifies first and foremost as a Writer-In-Progress.  She currently lives in Norman, Oklahoma with her wife Katherine and their feline familiars, Sadie and Salem.  She writes poetry, prose, and fiction focusing on the intersection of sexual/gender identity and spirituality.  She also blogs about whatever shiny object has captured her attention for the moment at DaughterofKieran.com.  She's a frequent author and instructor on Writing.Com and spends far too much time working on her social media presence when she could be writing.  Her debut novel, Choosing Her Chains, is currently available through Amazon.com.


When not wasting time behind a computer screen, Amalie enjoys cooking, knitting, crocheting, and enjoying the literary debauchery of her local book club.  She strives for moderation in all things--including moderation.  She also watches far too many bad BBC shows and is pretty sure her personal trainer has reported her missing.

Did you find the number? If you did, then click Amalie Cantor’s link – http://daughterofkieran.com/blog/  to continue Virtual FantasyCon’s Blog Hop Hunt.